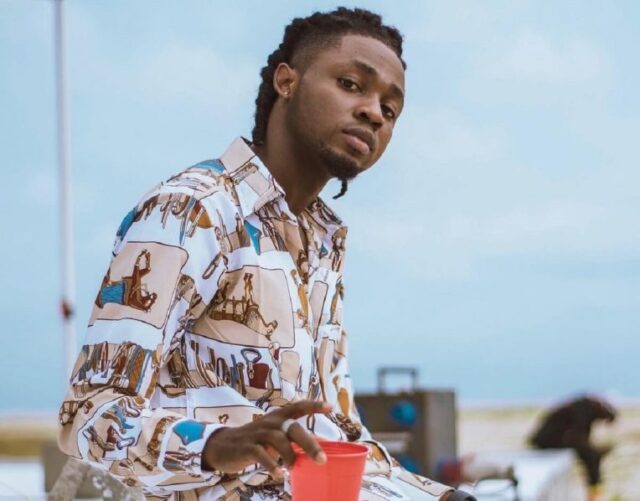 Omah Stanley Didia, alluded professionally as Omah Lay is a Port Harcourt-born Nigerian singer and songwriter. He is signed under KeyQaad and Sire Records; a subsidiary of Warner Music Group and also has a 5-track EP “Get Layd.”

Omah Lay was chosen as one of the Nigerian acts to grace Apple Music’s African Rising hosted by DJ Cuppy.

Stanley Omah Didia (born May 19, 1997) has found himself in the wells of music since he was a teenager.

He is known professionally as Omah Lay. Starting off as a rapper, he has grown into an A-list singer, songwriter, and record producer whose influence spread across Africa.

He broke into the music scene with the debut song, You, which is still a jam for most Afrobeats lovers. He won the coveted Next Rated Award at the 14th Headies Music Awards in 2021.

The Didia family has a history of being music enthusiasts. Omah Lay‘s paternal grandfather was a drummer for Highlife major act – Celestine Ukwu. So it didn’t come as a surprise to Stanley‘s parents when their son decided to tow the path of music.

He was born on the 19th of May 1997 in Port Harcourt. Raised in Marine Base, he is not a stranger to the rugged life of PH city. He picked up the creative hat when he became a teenager. Aspiring to become the next big rapper, he gave himself the moniker, Lil King, and would thrill his neighbors to freestyle rap songs.

Becoming disinterested in rap music, he decided to switch to music production and started understudying some of his friends who were producers. Within a few months, he had learned the skill and became a pro in the game. He started to collaborate with upcoming artists in Port Harcourt to create good music.

However, his heart was drawn back to the swinger lifestyle and he decided to give it a shot once more. Believing that he had the creative bug in him, he sat down to write the songs, Do Not Disturb and Hello Brother, which he recorded and released to the public. This was in 2019. By this time he had rebranded and settled on the stage name – Omah Lay.

The songs were quite successful and caught the attention of some record labels, who became interested in his work. He finally settled on Lagos-based label, KeyQaad Records; thus he had to move out of the city to pursue his dreams.

He finished his elementary and secondary schools with good grades in his Common Entrance Examination and SSCE.

Having moved to Lagos, Omah Lay began work in earnest to make music that his growing fan base would love and vibe with. After keeping his fans waiting for a few months, he dropped the jam, You, which achieved great success for a debut song. The song catapulted Omah Lay into the limelight and he became one of the shining stars of Afro-pop and Afrobeats in Nigeria.

He didn’t allow the flames of his success to die out before serving the world with his debut EP, Get Layd in May 2020. The project reaffirmed the prediction that Omah Lay was meant for bigger success in the industry. The songs received massive airplay on popular radio stations and TV stations in the country.

As his fame spread across the continent, he became the choice artiste that brands or music lovers hired to perform at shows and concerts. Due to his unique singing style and lyricism, top music artists have featured him in their songs. He collaborated with Olamide on the hit single, Infinity in 2020. Having caught the eye of Ghanaian female diva, Gyakie, he was the guest artiste on the remix of her popular song, Forever. The song was released in March 2021.

In December 2020, he was nominated for the Next Rated Artist Award at the 14th Headies Music Awards. He beat other top contenders, Bella Shmurda, Tems, and Oxlade to clinch the award in 2021. As part of his gift prize, he went home with a brand new car.

Before the close of 2020, he dominated the music airwaves for weeks with his second EP project titled What Have We Done.

With a large fan base spread across Africa, Europe down to North America, Omah Lay has an active social media presence. He has over1.2M followers on Instagram and over 698k followers on Twitter.

Described as a lyrical genius, the 25-year-old Omah Lay has one of the biggest fan bases in Nigeria. He is loved by both young and old. Besides music, he also has a great fashion sense. He keeps dreadlocks.

In December 2020, he and Alte singer, Tems, was arrested in Kampala, Uganda, when they went to perform for a show. They were hurriedly arraigned in a court and sent to jail. However, the Nigerian Foreign Affairs Ministry intervened and secured their release and they returned back to the country hale and hearty.

The talented singer, Omah Lay has given no indication as to whether he is in a serious relationship with a beautiful girlfriend or not. He is private about his personal life. He resides in Lekki, Lagos, in a serviced apartment. He is a Christian with a good personal relationship with God.

The talented Nigerian singer and songwriter, Omah Lay is currently valued to be worth an estimated amount of $500,000-$900,000.