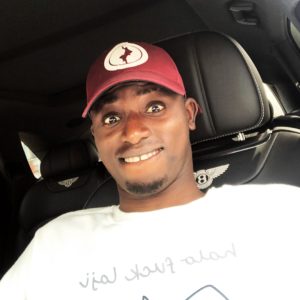 Aloma DMW had his Kindergarten to Nursery Two Education in “Baba School,” then proceeded to Nollas Nursery and Primary School where he completed his Nursery two to Primary Six Education. After his secondary school, he learnt Aluminium fabricating. From grass to grace is a very much story to describe Aloma DMW’s Journey into limelight. He was a street hustler with passion engaging in so many street oriented businesses just to make ends meet. Aloma was a street hawker, selling Okirika clothes (Second Grades), Puff Puff (Beans Cake), Working as an Aluminum fabricator and also was selling food, striving to survive in the street of Ikotun and so many places in Lagos.

Since there’s a popular saying that hard work pays, Aloma DMW was not left out as he received a video call from Davido on July 1, 2017. That was after Davido gave him his number but he was scared to give him a call, especially considering the fact that Davido is a Nigerian and African heavyweight celebrity. Aloma DMW had always wanted to be a Footballer and De Lima Ronaldo happened to be his role model not until that life changing call from Davido.

Davido made Aloma DMW his Personal Assistant and he became part of the Davido Music Worldwide (AMW) crew consisting of talented acts like Mayorkun, Peruzzi, Davido himself and others. Same date, Aloma  and Davido announced the signing of one of Nigerian fast rising rave of the moment Lil Frosh to AMW/DMW via their official social media pages.

Lil Frosh still very much AMW/DMW artist went ahead to release Fifty 50 and Kolere Body featuring Mayorkun is still making wave and receiving massive airplays Nationwide and across the border. It’s very much announced that you should be aware that Aloma DMW net worth is not yet estimated anywhere. Consider all others seen elsewhere to be false as this is verified and direct from Aloma DMW himself.

You can connect with Aloma DMW on the following instagram handles below;