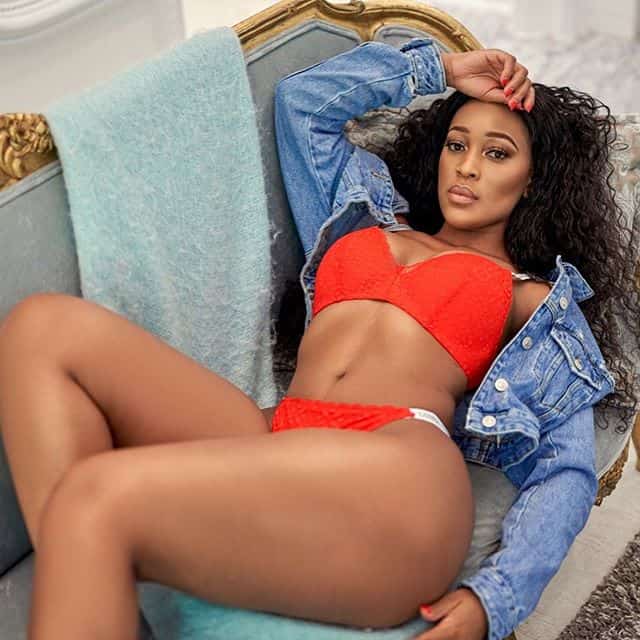 Buhle Samuels (born 25 May 1990) is a beautiful South African actress and television personality.

She hit the spotlight after being known for her time as Matshidiso in the popular television show Muvhango.

The actress has starred in other series which are created in South Africa and she’s one of the most sought after in the industry.

Buhle Samuels was born on the 25th day of May 1990. She is the youngest of two children.

She was born to parents with the family name Samuels and she has an elder sister, Mbali Samuels.

She was raised in Soweto township in South Africa. Her mother is a nurse in Saudi Arabia and is still alive and there are both in regular contact with each other.

Buhle Samuels completed her primary and secondary education in the Pretoria, Gauteng region in South Africa.

She obtained a degree in Somatology from a prestigious South African University.

Buhle Samuels started out her career as a Television show host in 2014. She hosted the early morning breakfast show on the Africa Magic channel.

She auditioned for the role of Matshidiso Mofokeng alongside many popular South African stars in 2014 and she got the role. The show titled Muvhango became very popular and gained widespread fame in South Africa. She played the role for four years from 2014 to 2018 before leaving to explore further and gain more experience and develop get music career.

She was cast in 2019 for the role of Zandile for the ETV show Imbewu and she appeared in the Netflix show Kings Of Jo’burg.
She is also a singer and has a contract with Arthur Mafokate‘s 999 group/records. She is also a popular dancer across South Africa.

Buhle Samuels is active on social media and regularly uploads her pictures and dance fitness sessions.

Buhle Samuels lives a very private life with respect to her relationship and love life. She told True Love Magazine that the only way she can deal with her relationship as an actress is to keep it out of the public eye.

She is not married yet and has no children. She exposed a man, Paul Dominick who reached out to her his email messages asking for sex offering her over 250,000 in South African currency for a night. She shared the message online and told her male fans that her body is not for sale.

She takes her fitness routine very seriously to remain fit for her dance career.

Buhle Samuels has a net worth of $250,000 to $600,000 gotten during the course of her six-year career in the media and entertainment industry in South Africa.