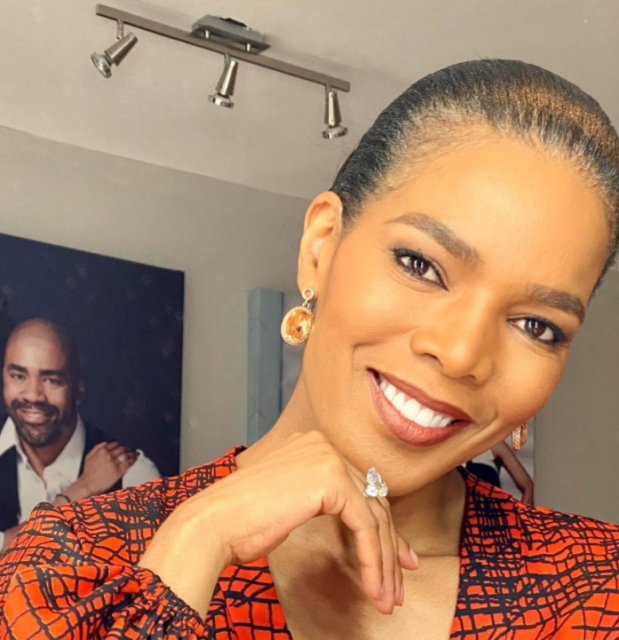 She came into the limelight after starring in the South African movie SABC soapie drama Generations.

Connie Ferguson has portrayed the role of Karabo Moroka in Generations, which was widely loved too.

Connie Ferguson was born in the early 70s,10 June 1970, in Kimberly, Northern Cape in South Africa.

She is a Christian.

Connie Ferguson mother died in 2013 after a brief illness, and her father is still very much alive.

She grew up with a passion for acting and dancing.

Connie Ferguson, after her primary education, set out to study law at the University.

She opted for Criminal Law but was said to have failed woefully at the course.

She then decided to study drama, which she successfully did, and graduated with a drama and performing arts degree at the University of KwaZulu-Natal in 2012/13.

Connie Ferguson is a South African veteran actress, film producer, and scriptwriter. She made her breakthrough in the film SABC soapie drama, Generations appearing from the first episode back in February 1994 down to October 2010.

She occupied a lead role in Maitemogelo and Soul City in parts 1-4. She landed another significant role in What If, Crime Reporter. Once more, she was chosen as a lead actor in the movie, Cape Of Good Hope, making a cameo appearance in Okavango.

She was also present in the movie production Danger Zone, The Right Track, Suburban, and Matawakabele parts 2 and 3, not leaving Lasilo Rula 2.

Connie Ferguson also made appearances on TV programs. Some of which are Eduspectrum, Molomo, Radiopotso, Handy Hints, Plascon Change Your World, and Continuity- CCV and SABC 2.

Her successful career has seen her starred in advertising roles, appearing for Ellerines from 1990-1995, Ultramel Custard 1992 and 1995, Black Like Me in 1998, and a host of other adverts.

She did her first movie production in 2013. Producing and starring in the drama series titled Rockville. Rockville is a Mzansi Magic soapie drama series.

Connie Ferguson‘s work and effort have not gone unnoticed.

In 1993, she won an award for the South Africa Ten most beautiful women hosted by Cosmopolitan Magazine.

She was also featured in David Dodd‘s award for South Africa’s most beautiful woman.

Connie Ferguson is a widow.

She married the late Aaron Shona Ferguson, an actor and the co-founder of Ferguson films.

His death came with devastating effects on the family. She has a daughter from the marriage named, Alicia Angel Ferguson, born in June 2002.

Before her marriage to the late Shona Ferguson, Connie Ferguson had a husband named Neo Matsunyane, whom she married in the late 90s producing a daughter named Lesedi Matsunyane on 30 December 1992.

However, the couple got divorced in 1998.

Connie Ferguson is not just an actress but a businesswoman and a philanthropist.

She is a big name in the African movie industry and has emersed an estimated $2 million as her net worth.

She also models and advertises for famous brands and has been handed ambassadorial roles.

Connie Ferguson has featured in many TV shows, movies, and dramas. The list below contains some of her most popular and highly rated films.