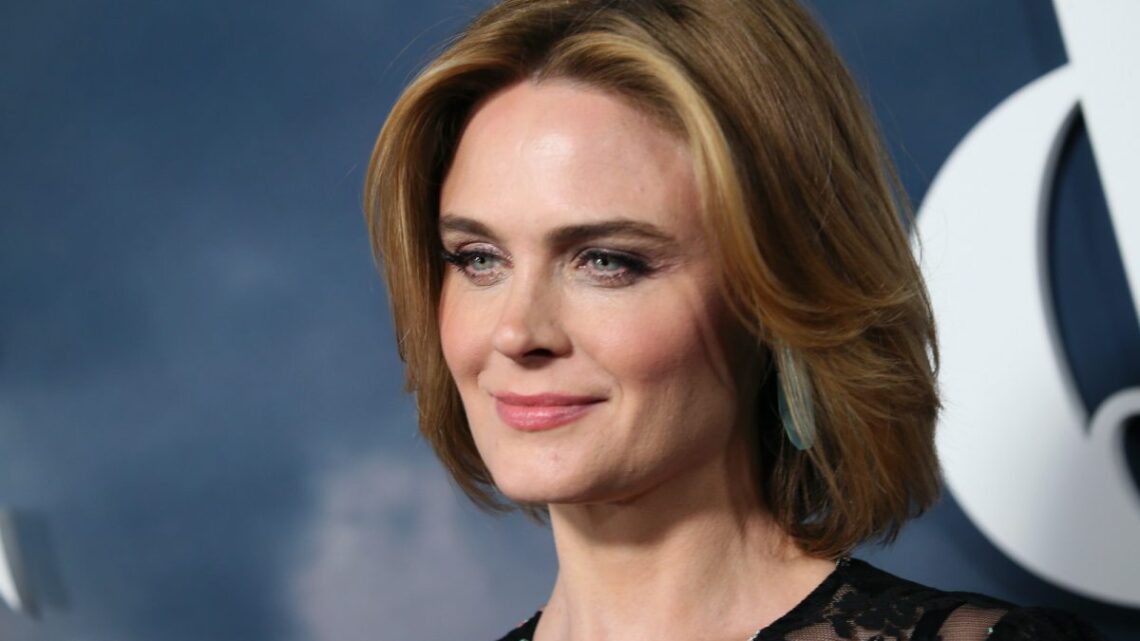 She is loved by fans, especially for her scintillating role as Dr. Temperance “Bones” Brennan in a Fox crime procedural series titled Bones (2005–2017).

Emily Deschanel is also known to be a full-fledged animal activist who has engaged in several activities and awareness programs to promote animals.

Emily Erin Deschanel was born in the famous Los Angeles, California, on October 11, 1976.

Her father is a cinematographer and director named Caleb Deschanel, whereas her mother is an actress named Mary Jo Deschanel.

Her younger sister is an actress and a singer-songwriter named Zooey Deschanel.

Emily Deschanel‘s paternal grandfather was French and hailed from Oullins, Rhône; her roots also include English, Dutch, Swiss, and Irish.

She graduated from Boston University‘s Professional Actors Training Program with a Bachelor of Fine Arts in Theater.

In 1994, Emily Deschanel made her feature film debut in a romantic comedy-drama titled It Could Happen to You, on which her father worked as chief cinematographer. Her next notable appearance was Pam Asbury in Stephen King‘s horror miniseries titled Rose Red in 2002. Then she starred in Cold Mountain, The Alamo, and Glory Road and was named one of “six actresses to watch” by Interview Magazine in 2004.

In 2005, Emily Deschanel was cast as Dr. Temperance Brennan alongside David Boreanaz as FBI agent Seeley Booth on the Fox crime procedural comedy-drama titled Bones. The film is based on the novels, and the career of a forensic anthropologist and an author called Kathy Reichs and was created by Hart Hanson.

Emily Deschanel and David Boreanaz worked as co-producers at the start of the show’s third season before becoming producers in the middle of the show’s fourth season.

While Bones was still in production, Emily Deschanel also played the Brennan character on a 2015 episode of a series titled Sleepy Hollow and a 2016 episode of BoJack Horseman.

Alongside Alyson Hannigan, Jaime King, Minka Kelly, and Katharine McPhee, she made a video slumber party that’s featured on FunnyorDie.com to promote regular breast cancer screenings for the organization Stand Up 2 Cancer.

In 2021, Emily Deschanel is set to star in the upcoming Netflix miniseries Devil in Ohio.

Emily Deschanel‘s beauty and elegance perhaps are the reason why she has attracted numerous roles in films. She moves around with a comfortable height of 5 feet 9 inches (1.75 m) and weighs approximately 60 kg (132 lbs).

Emily Deschanel is a vegan and a dedicated advocate of animal rights. She was responsible for narrating the documentary ‘My Child Is a Monkey’ and remained an associate producer of yet another show titled How I Became an Elephant.

In pursuit of promoting the regular screening of breast cancer for the charitable program themed Up 2 Cancer, she, alongside Katharine McPhee, Minka Kelly, Jaime King, and Alyson Hannigan, developed a video slumber party that featured on FunnyorDie.com.

On September 25, 2010, Emily Deschanel married an actor and a writer named David Hornsby in a small private ceremony in the Pacific Palisades area of Los Angeles.

On September 21, 2011, the couple welcomed their first son named Henry Lamar Hornsby. On June 8, 2015, they had their second son named Calvin Hornsby.

In 2015, David Boreanaz, Emily Deschanel, Bones executive producer Barry Josephson, and Kathy Reichs, who wrote the books upon which the series was based, filed a law lawsuit, Fox, claiming they were cheated out of their share of series profits.

In February 2019, an arbitrator awarded them the sum of $179 million: $128 million in punitive damages, $32 million in compensatory damages, $10 million in prejudgment interest, and more than $9 million in fees and costs.

Being an A-list actress has helped Emily Deschanel a lot in acquiring desired wealth, and now she is believed to have accumulated a net worth of US$30 million.