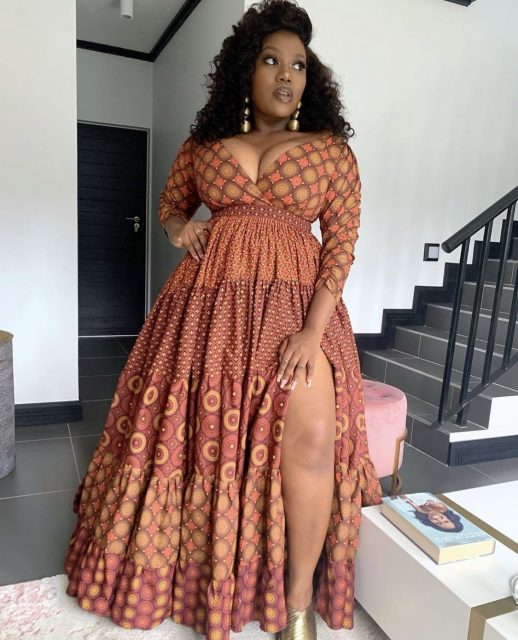 After her role as Mamlambo in Uzalo, many South African soap opera fans fell in love with her.

People were looking forward to seeing her in the show because she played the prophetess so brilliantly.

Gugu Gumede was born to Mr. Simon Hulumeni Gumede and Mrs. Zanele Magwaza-Msibi in Kwazulu-Natal in 1992 on the 10th of November noting that her mother is a well-known and outspoken freedom warrior also well-known for her political activism.

Gugu Gumede grew up in a wealthy household with her mother and father who were heavyweights in South African politics. Her father died in a terrible vehicle accident in 2017, and she was devastated. Before he died, he held important responsibilities and positions in South African politics at the time. He was a member of the KwaZulu-Natal assembly.

Her mother didn’t want her to go into the entertainment industry as an actor at first but she wanted her daughter to study law and practice it. When she told her mother about her passion for acting, her mother provided her with all of the assistance she needed

She enrolled in the school to pursue certification in acting and drama.

Gugu Gumede returned to South Africa in 2013 after finishing her education in California, United States.

Numerous opportunities opened up for Gugu Gumede as immediately she came back to South Africa. Generations were the first job that came knocking and she earned a part in the popular South African TV show. She was cast as Mandisa on the show.

More opportunities presented themselves for the gifted actor, and she was cast in another popular South African Television series, Uzalo. Fans fell in love with her personality while she was playing Mamlambo. She was thrust into the spotlight in no time.

The character is well-known for being bold loudmouthed, opinionated, stealing boyfriends, spreading rumors.

Gugu Gumede is a stunning woman who, in addition to her acting abilities, is a natural beauty. Her fans and followers now have quick access to the celebrity’s photo updates thanks to social media.

Her handle is @itsugugugumede and she has over 1 million followers.

On the photo-sharing app, she posts images of her outfits. She has frequently posted photo updates on her natural page.

She has frequently shared photos of herself in her natural state, with little or no makeup. Her hairstyles are beautiful, and when she’s not plaiting, she flaunts her naturally thick hair.

Gugu GumedeGugu Gumede is currently single and has no children. the popular actress often plays roles on TV with a personality that is absolutely opposite to her real-life nature.

She is calm whereas her character on Uzalo is loud-mouthed and foul. She is an introvert and can only be loud in environments and places when her close friends are around.

She is a devout follower of God and she is very open about her Christian religion and her on-screen presence reflects this seeing she once played the role of a prophetess.

She is an extremely private individual and has refused to share her birthdate information. Gugu Gumede has no child, nor husband, no record of a boyfriend too neither is she married.

The gifted beautiful South African on-screen character, Gugu Gumede has amassed an estimated net worth of $500,000-$750,000.