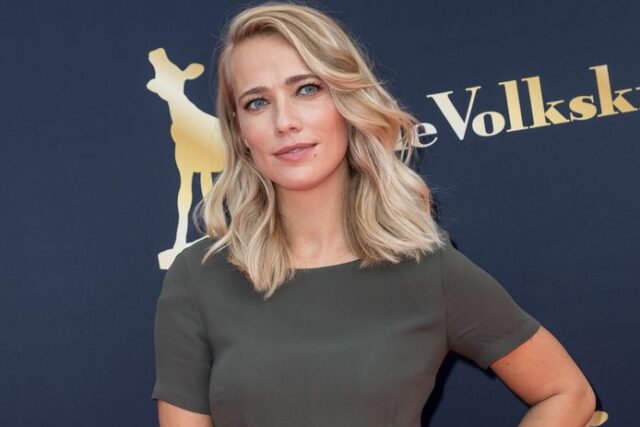 She is particularly appreciated for her roles in; Westenwind (1999), De luizenmoeder alongside Ilse Warringa (2018), Dummie the Mummy and the Tomb of Achnetut (2017).

Jennifer Hoffman has been on the scene for 15 years and is well-recognized. She is one of the few Dutch actresses who constantly impress the industry.

Jennifer Mary Hoffman was born and raised in Gouda, Zuid-Holland, Netherlands. She is the offspring of Dutch parents and was born on December 23, 1980.

Information about her educational background and qualifications is unavailable at the moment.

However, it’s is believed that the Dutch star schooled in Gouda, Zuid-Holland, Netherlands, where she was raised.

Jennifer Hoffman‘s career as an actress has been featured in several movies. She appeared in a 1999 TV series titled Westenwind as Sam de Graaf. Futhermore, she played a role Spoorloos verdwenen, as Max Noordhof in 2006. And played the role of Sabine Barman in Toren C (2008).

Likewise, Jennifer Hoffman starred in the critically acclaimed Spion van Oranje as Lena in 2009. And in the same year, she appeared in 36 episodes of the television series Verborgen Gebreken and played the character of Puck Rademaker.

In 2012, she appeared in the famous Dutch series Dokter Tinus, as Lisa de Graaf. Additionally, Jennifer Hoffman played in Bros Before Hos as Suzanne. She was also in a comedy-drama titled Dummy the Mummy in 2014.

In 2015, Jennifer Hoffman starred in the films: Dummie the Mummy and the Sphinx of Shakaba as Friek, Hallo Bungalow, as Ilona, Obsession as Lian, No Babies on the Field as Nanda, and Homies as a Debt collection agent.

In 2017, Jennifer Hoffman reprised a role in Dummie the Mummy and the tomb of Achnetoet as Juffrouw Friek. Additionally, she portrayed Hannah, in De Luizenmoeder, in 2018.

In 2021, Jennifer Hoffman appeared in ATV titled Deep Shit as Veerle. In the same year, she acted in Rebels @ School, portraying the role of Hannah.

Jennifer Hoffman has received praises over the years for her beauty and choice of fashion style. She’s supported by her perfect height of 5 ft 10 in / 178 cm.
Her hair is blonde, and her eyes are distinctively blue.

Jennifer Hoffman is not outspoken about her relationship life. Currently, the Dutch entertainer has managed to keep her personal life out of the media. However, we will keep tabs on any development, which will be posted here as soon as it is obtained.

Jennifer Hoffman has appeared in blockbuster films and television series throughout her career. She’s still very much active in the game, and it’s expected that her bank account continues to experience increased funds.

Currently, Jennifer Hoffman has accumulated an estimated US$2.5 million as net worth.