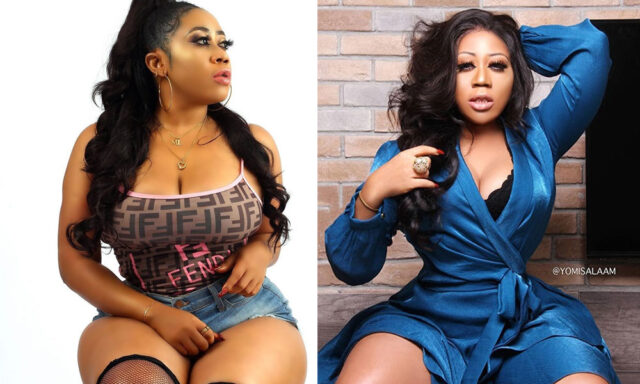 Moyo Lawal is a leading Nollywood Actress, movie producer, and television personality. She is notable for winning the ‘Revelation of the year’ award at the Best Of Nollywood Awards in 2012.

Moyo Lawal was born on the 1st of January in Badagry town to the family of Mr. and Mrs. Lawal.

She bagged a BSc. degree in Creative Arts from the prestigious University of Lagos.

Moyo Lawal‘s career began from acting in small play productions. She had been advised by a friend to try out acting while she was still in school. She was one of the contestants in the reality TV show ‘Next Movie Star‘ but was unsuccessful in the show.

She debuted in her first television role in the series, Shallow Waters, playing the role of Chioma.

Her big break in the industry came when she was cast in the award-winning TV series, Tinsel where she played the role of Chinny.

In 2012, she took home the Revelation of the year at the BON Awards show.

Moyo Lawal was once a victim of an unsuccessful robbery attempt while she was driving on Third Mainland Bridge, Lagos. She created awareness of the incident online, narrating her experience and put forward methods to curb the incidence of armed robbery on the roads.

She has never been married and doesn’t have a child. Her current relationship status is unknown.