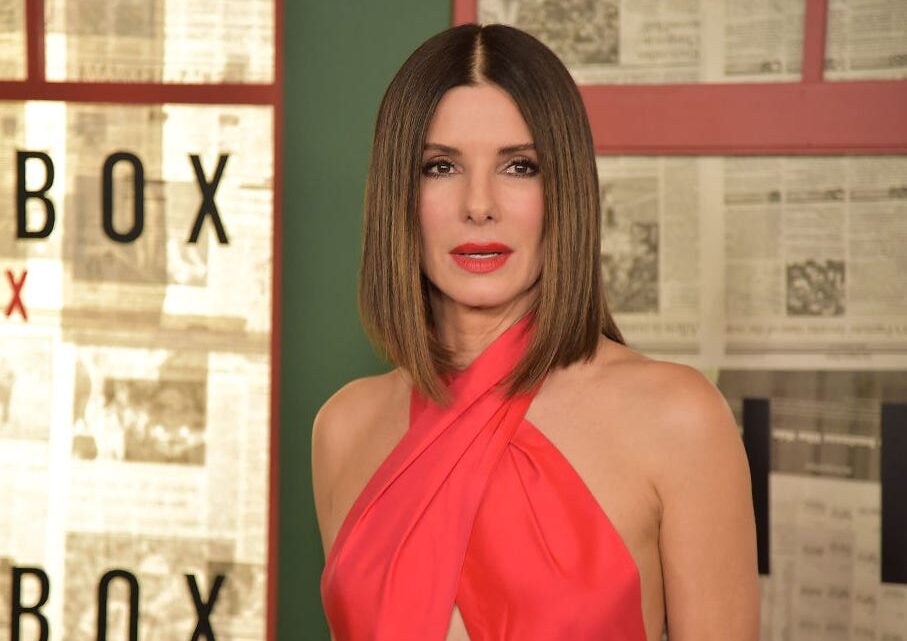 The talented actress, is famous for her display of charismatic and strong-willed energy onscreen, mostly in scenes of romantic comedies.

She had so many notable awards, nominations, and accolades to her name, including an Academy Award (2010), a Golden Globe Award (2010), and other worthwhile awards.

Sandra Bullock, however, was shot to stardom following her appearance in the 1994 action thriller, Speed.

Sandra Annette Bullock was born on July 26, 1964, in the Arlington, Virginia suburbs of Washington, DC.

She was born to Helga Mathilde Meyer, an opera singer and voice teacher from Germany, and John Wilson Bullock, who was an Army employee and a part-time voice coach from Birmingham, Alabama.

Her parents met in Nuremberg and got married in Germany. The outstanding actress has a younger sister named Gesine Bullock-Prado.

Sandra Bullock was raised while shuttling around Nuremberg in Germany, Vienna, and Salzburg, Austria, and grew up speaking German. She is 58 years old.

Throughout her formative years, she grew up in the care of her relatives as her mother was often on her European opera tours.

She made minor opera appearances as she learned ballet and vocal arts. Despite maintaining American citizenship, she applied for and got German citizenship in 2009.

Sandra Bullock graduated from Washington-Lee High School in 1982. Her stay in the school was remarkable following her roles as a cheerleader and featured in school theatre productions. Subsequently, she attended East Carolina University (ECU) in Greenville, North Carolina, where she got a BFA in Drama in 1987 upon graduation.

During her university years, she performed in various theatre productions with the likes of Peter Pan and the Three Sisters inclusive.

Later on, she relocated to Manhattan, New York, where she did low-paying jobs like a bartender, cocktail waitress, etc., while auditioning for movie roles. While in New York, she studied at the Neighborhood Playhouse School of Theatre.

While in New York, Sandra Bullock made appearances in several student films and eventually made her debut in an Off-Broadway play, No Time Flat. Her performance impressed the director, who brought other acting roles to her desk.

Although the parts were not enough to get her to the much-coveted position, she continued until her first public unveiling with her supporting role in the sci-fi action film, Demolition Man (1993).

However, her breakthrough was in 1994 when Sandra Bullock starred as Annie Porter alongside Keanu Reeves in the blockbuster movie, Speed. The movie grossed over $350 million US dollars worldwide, and she was set up as one of Hollywood’s best minds.

She continued to gain features and eventually got her first Golden Globe Award nomination for Best Actress-Motion Picture Musical or Comedy, following her performance in the 1995 romantic comedy, While You Were Sleeping.

Sandra Bullock starred in A Time To Kill (1996) crime drama and was later nominated for an MTV Movie Award for Best Breakthrough Performance. However, her acting prowess did not end there, as she has over 50 movie appearances and over 15 production credits. She moved on to amass accolades and awards as a result of her brilliant display.

In recent times, the now-popular actress has been reported to be starring in a couple of movies, with the most current being Bullet Train, a 2021 action thriller alongside Brad Pitt and directed by David Leitch.

Additionally, Sandra Bullock owns a production company named Fortis Films, which has her father and sister at the helm of affairs. She inclusively has two restaurants to her name: Bess Bistro, and the other is Walton’s fancy and staple.

Sandra Bullock has in the past few years proven how generous she is with so many donations to various organizations, most especially the American Red Cross.

Sandra Bullock was in so many relationships, including her engagement with actor, Tate Donovan, whom she met on the movie, Love Potion No. 9. After their three-year relationship ended, she went on to date football player, Troy Aikman and actors Ryan Gosling and Matthew McConaughey.

Eventually, on July 16, 2005, Sandra Bullock married motorcycle builder and Monster Garage host, Jesse James. However, in November 2009, the marriage was faced with several threats to unity as the couple entered into a custody battle with Jesse James‘ second ex-wife, former adult film actress, Janine Lindemulder, with whom he had a child.

A year later, in 2010, after winning full legal custody of Jesse James‘ daughter, more troubles escalated with several women claiming to have had affairs with Jesse James during his marriage to Sandra Bullock.

On March 18, 2010, Jesse James publicly apologized for his alleged infidelity and asked for his family’s forgiveness. However, Sandra Bullock filed for divorce on April 23 in Austin, Texas, which was finalized on June 28, 2010, based on a conflict of personalities.

Sandra Bullock has two adopted children, a son named Louis Bardo Bullock and a daughter named Laila Bullock, whom she adopted in 2010 and 2015, respectively. She has reportedly been dating model and photographer, Bryan Randall in recent times.

Sandra Bullock has actually made history by acting and has left a very great significance in the Hollywood movie scene.

On the 24th of March,2005, Sandra Bullock received a Motion Picture star on the Hollywood Walk of Fame.

Due to her performance in the film Gravity (2013), she was also nominated again in all the above categories.

Sandra Bullock‘s acting career has been successful, having the younger generation looking up to her as an icon. Her net worth is estimated at around US$200 million.

Her status placed her among Time’s 100 most influential people in the world in 2010 and gained her the People’s Most Beautiful Woman title in 2015.

Sandra Bullock was also announced as the world’s highest-paid actress in both 2010 and 2014.

Sandra Bullock has accounts on popular social media spaces like Instagram, where she has over 1.1m followers. She is also on Facebook @Sandra Bullock with about over 19k followers.

Additionally, she posts pictures and snippets of her movies on her social media pages to view her fans.