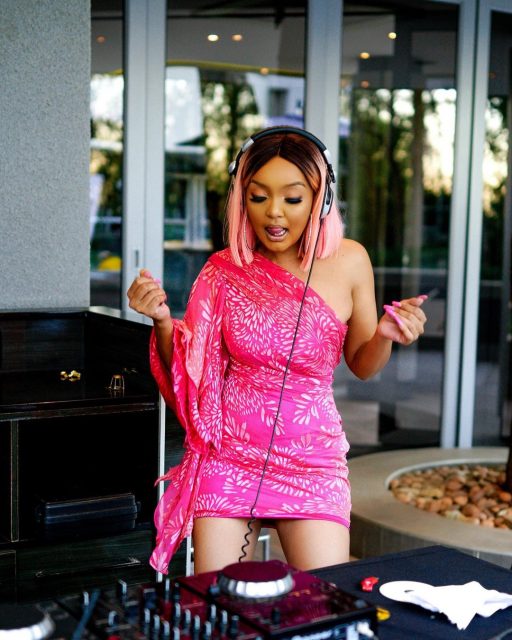 She is one of the figures who rose to fame after their appearance in the first season of Being Bonang.

She was later interviewed by TshisaLIVE and has gone on to build over 200,000 Instagram followers.

Tebogo ‘Pinky Girl’ Mekgwe is the only child of her parents. She was born on the 12th day of March in 1988.

During her childhood days, she spent a lot of time with Bonang Matheba.

She considers the celebrated personality as her sister and dives her credits for most of the things she has learned in the industry.

Tebogo ‘Pinky Girl’ Mekgwe was given the nickname, The Family’s Pinky Girl at a tender age because she appeared so light.

Althoughhough her real name is Tebogo Mekgwe, many choose to address her by the nickname. No doubt, she likes the name too.

She also pays a lot of respect to her high school and is also a very shy person.

Apart from being addressed by the nickname, Pinky Girl, the media personality loves the color pink.

She shares pictures containing a touch of pink either on her hair, clothes, or background.

After completing her high school academic pursuit, she was admitted to the Midrand Graduate Institute, where she completed a program in Computer Sciences.

After this, she got a job and worked in an information technology firm. Seven years, she later quit her job due to the reality TV show.

Tebogo ‘Pinky Girl’ Mekgwe is a computer science graduate and has a career in the Information and Technology industry. However, her pursuit of being an actress is gradually taking her away from the IT industry.

Her rise to stardom started after joining Bonang Matheba‘s reality show. The storyline of the third episode puts more focus on her. In one of the recent episodes, Bonang bought a BMW convertible for her.

Tebogo ‘Pinky Girl’ Mekgwe has also expressed her interest in actualizing her dreams of becoming a DJ. She attributes her success and popularity to the Being Bonang show.

Tebogo ‘Pinky Girl’ Mekgwe hinted that DJ Miggs FoReal, a Pretoria-based Disc Jockey, would assist her with some lessons.

In one of the show’s segments, she was shown how to match two songs to achieve an effortless transition while simultaneously dropping the song’s base.

She has also taken to social media to appreciate her mother several times.

She expresses gratitude for all her mother went through for her and addressed her as her best friend forever and her anchor.

Tebogo ‘Pinky Girl’ Mekgwe‘s relationship life is kept concealed, she hasn’t posted or made known who her boyfriend, spouse, or husband to be is on social media.

She has amassed an estimated net worth of about $1 Million.