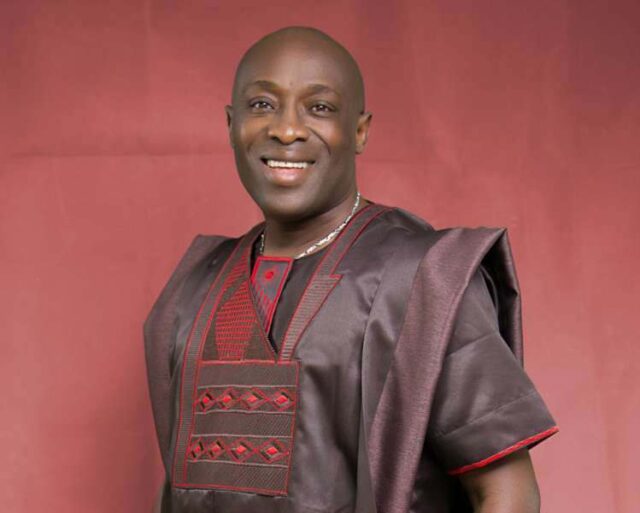 Adewale Ayuba (born  6 May 1966) is popularly and professionally addressed as Mr. Johnson. He is one of Fuji music’s bedrock and core vitals in Nigeria. The Fuji star is well known for his unique Fuji sounds.

Adewale was the first Fuji star that brought Fuji music to the international scene. Mr. Johnson is very popular, and he is also well acknowledged. Now let’s take a sneak preview at some interesting facts about the background details of the renowned Fuji star.

Adewale Ayuba, also known as Mr. Johnson, was born on the 6th day of May in the year 1966. Aged 56 years old, he was born and raised in Ikenne, Ogun State, in the Southwestern part of Nigeria.

Adewale Ayuba is the last child of his family, but TheCityCeleb is yet to confirm the names and identities of his parents and siblings.

He has always been a lover of music. At the age of 8, Adewale began to appear in musical competitions in his hometown of Ikenne. He decided to follow up his childhood activities by delving into music as a full-time career.

Adewale Ayuba attended and graduated from the Queens Borough Community College. Later on, he furthered his education by studying Architecture at the Ogun State Polytechnic, located in the state capital.

Adewale Ayuba is happily married to a lady simply identified as Azukaego Kwentoh.

Adewale Ayuba reportedly met his wife, Azukaego Kwentoh, at a cafeteria in Queens Borough Community College, where he studied, and they eventually got married in the year 1989.

His wife hails from Onitsha-Oke, Anambra State, in the southeastern part of Nigeria. Adewale Ayuba and Azukaego Kwentoh reportedly gave birth to seven children. One of his children name is Tiwalade Ayuba.

Adewale Ayuba released his first studio album titled “Ibere’’ which means “Beginning’ when translated to English. He reportedly released the album at the age of 17. The album catapulted his musical career, and sooner than expected, he became a popular Fuji star.

In the year 1990, Adewale Ayuba got signed under the Sony Music record. The following year after he was signed to Sony Music, he released an album titled “Bubble”, the album boosted his career internationally.

Adewale Ayuba‘s high-tech instrumentation and distinct voice changed the face of Fuji Music. For the first time in History, the Nigerian Elite, who until then had ignored Fuji Music, embraced it.

After the success of Bubble, Adewale Ayuba released a follow-up album, Mr. Johnson, titled “Play For Me”, which also became an instant success in 1992. In 1993, he was signed to Premier Music (Nigeria) before embarking on his first West Africa coast tour, performing in several African countries.

Adewale Ayuba currently has a net worth estimation ranging from US$5 million to US$10 million.