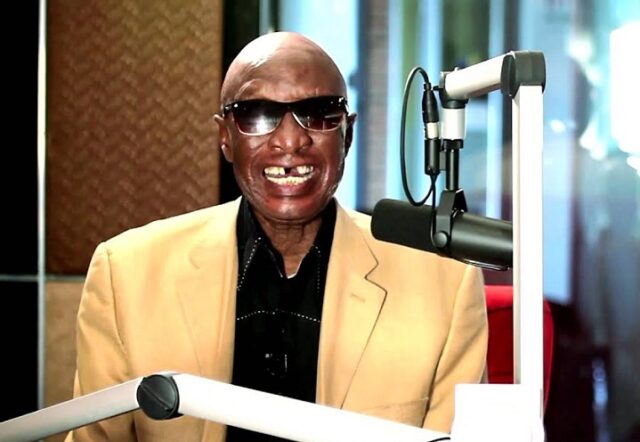 Babsy Mlangeni (born 24 February 1943) is a South African music legend who became popular through his song titled Sala Ema in 1969.

He was born in Orlando West, Soweto. He is a guitarist, composer, singer, and entrepreneur who started making music professionally in 1968.

Babsy Mlangleni is blind, yet he did not see it as an excuse to stop or slow him down in his musical career.

He went through a lot before he could find a producer to promote his song, but his determination was so strong that he refused to be discouraged.

He has been entertaining his song lovers as far back as 1970/the 80s.

He has sung so many songs ever since he entered the music industry.

As a result of his fame and the great meaning his songs have, he was honored with a Chancellor’s Award from the University of Northwest Mafikeng campus, South Africa.

Babsy Mlangleni was born on the 24th of February 1943 in Orlando West, Soweto, in South Africa.

He was born blind even though he had never seen his deformity as an excuse not to thrive or succeed in life.

Parents and neighbors loved him as he usually acts special and obedient.

Information about his secondary school education and university education is currently not available.

His wife died of cervical cancer at the Bertha Gxowa hospital, Germiston, in 2013. This incident shook him because he had just lost his son a month earlier.

His son died of a stomach ulcer. He has five surviving children. Apart from his music career, which he is passionate about, his children are the most important part of his life.

Even though Babsy Mlangleni is a professional singer, he and a co-founder of a company specializing in printing materials of different varieties. His career as a singer is huge as he sang so many songs, among which we have Sala Emma, which is the all-day hit song that brought him into the limelight.

He stated that it was not easy for him to start this career as he was not rich enough to promote himself or record his composed songs. He went from door to door searching for promoters and producers to help him with his talent before connecting to a producer.

He said in an interview that ‘’people think that when one is blind, there is nothing that one can achieve’’.

Babsy Mlangleni stated that such belief is not true, and also, in practical he proved it by making his way straight to the top in the music industry in South Africa.

He said the old era made music difficult as it does not allow singers to sing using the English language and mix other local languages with it as it is popularly and freely done now.

The following are some of the songs sung by Babsy Mlangani as there are so many of them that they cannot all be mentioned;

Fake News of His Death

There was a time Babsy Mlangani was announced dead by a radio station.

Thobeloa FM also played some of his songs to pay him tribute in reaction to the fake news.

This news got the whole family and fans worried before Babsy Mlangani appeared again to clear the confusion.

The legendary renowned South African musician, Babsy Mlangani has accumulated an estimated ne worth of $250,000 – $500,000.