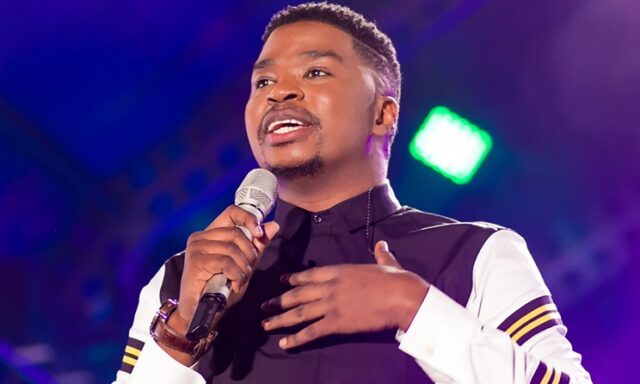 He is a 41 years old multi-award winning Gospel artist, songwriter and music producer.

Dr Tumi is also a medical doctor and practices the profession at Mabopane, north of Pretoria. He became a household name after releasing his albums, The Gathering Of Worshippers and Love On The Cross.

Dr Tumi, originally known by his real name Tumisang Makweya, was born on the 10 of July 1981 into the family of David Makweya and Lilly Makweya.

He grew up in Seshego, Limpopo and was very ardent about his future. Dr Tumi‘s father was a priest while his mother was a teacher in a local school.

The doctor and Gospel artiste was very outstanding in high school, and eventually got admitted at the Medical University of Southern Africa (Medunsa).

After a six-year study in the medical institution, Dr Tumi graduated in 2006.

Dr. Tumi started off by practising medicine at a public medical facility for a brief spell. After his departure, he set up a private medical outfit in Mabopane, north of Pretoria which he runs to date.

Dr Tumi is signed to the Universal Music records label. He also has a recording deal with King Records.

The medical graduate developed an interest in Gospel music while at school.

He once competed in the Coca-Cola Popstars singing competition and finished among the top twenty contestants that year. He was launched into the limelight after releasing his albums, The Gathering Of Worshippers and Love On The Cross.

Since the start of his music career, he has gone on to record hit Gospel songs such as No Other God, Wafika, All of Me, and Because of Jesus.

Dr Tumi is also a prolific songwriter and music producer in South Africa, with his proficiency in Gospel music earning him accolades in recent years.

He also owns a certified double-platinum album, Love and Grace.

At the 9th SABC Crown Gospel Music Awards, which was held at the ICC, Durban in 2016, Dr Tumi won five awards. They are;