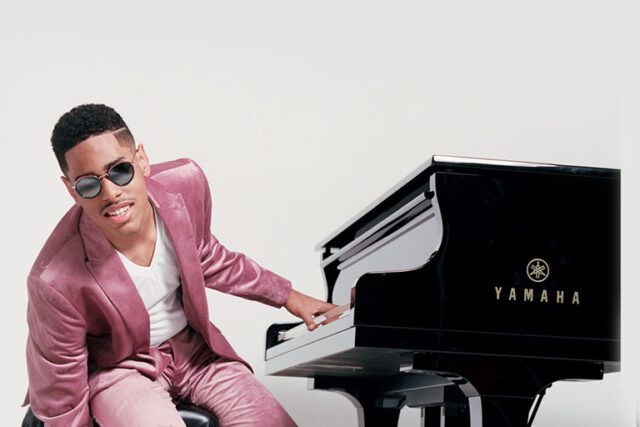 Matthew Whitaker (born April 3, 2001) is a young and upcoming jazz pianist from the United States.

He has played at Carnegie Hall, the Kennedy Center, Lincoln Center, and the Apollo Theater.

Matthew Whitaker performed in the induction of Stevie Wonder into Apollo Theater’s Hall of Fame.

Matthew Whitaker was born to May Whitaker and Moses Whitaker in Hackensack, New Jersey, United States. He was born three months early, weighing less than two pounds, and his chances of survival were estimated to be less than 50 percent. He was born on the 3rd of April 2001.

His blindness was caused by retinopathy of prematurity (ROP), which he was later diagnosed with. He played Twinkle, Twinkle Little Star on a miniature Yamaha piano he had gotten as a birthday gift on his third birthday. Matthew Whitaker had listened to the song before and was able to perform it by ear.

Matthew Whitaker started learning the piano at The Filomen M. D’Agostino Greenberg Music School, a New York academy for the blind and visually challenged when he was five years old.

He learned to play the piano primarily by hearing because of his impeccable pitch, but he also learned to read Braille music. He went on to The Harlem School of the Arts, where he learned how to play the organ, percussion instruments, clarinet, and bass guitar, in addition to classical and jazz piano.

Matthew Whitaker received funding from the Jazz Foundation of America when he was nine years old, and as a teenager, he enrolled in the Manhattan School of Music’s Pre-College Jazz program. Matthew Whitaker‘s career was inspired by musicians and jazz artists like Jimmy Smith, Joey DeFrancesco, Art Tatum, Oscar Peterson, Barry Harris, Erroll Garner, and Thelonious Monk.

Matthew Whitaker‘s debut album, Outta the Box, was released on March 6, 2017. He collaborated with several top artists, including Christian McBride, Dave Stryker, Will Calhoun, Sammy Figueroa, Melissa Walker, and James Carter. They were all included in his first album. The album gained positive reviews.

Matthew Whitaker won first place on Fox’s Showtime at the Apollo in April 2017 after performing on the Ellen Degeneres Show and competing on Fox’s Showtime at the Apollo. He has traveled extensively in Europe, the Middle East, and Asia. Matthew Whitaker has played at the Kennedy Center’s main concert hall in Washington, D.C., as well as Carnegie Hall‘s Weill Recital Hall.

Matthew Whitaker was the opening act for Stevie Wonder‘s inauguration into the Apollo Theater’s Hall of Fame at the age of ten. He is the focus of Thrive, a 13-minute documentary on a musically gifted 12-year-old blind boy’s extraordinary skill and irrepressible personality.

Matthew Whitaker is currently single and has no children. Currently, he is highly focused on his career and aims to win more awards for his fans and supporters.

Concerning his mission, he stated, “What I enjoy best is playing music”…”I am a musician, who happens to be blind…I have been blessed with a God given gift and my prayer is that I can continue to be a blessing and inspiration to others.”

Matthew Whitaker is not married and has no child or girlfriend.

Matthew Whitaker is active on Instagram. His official handle is @MatthewWhitakerOfficial. And he has over 20 thousand followers.