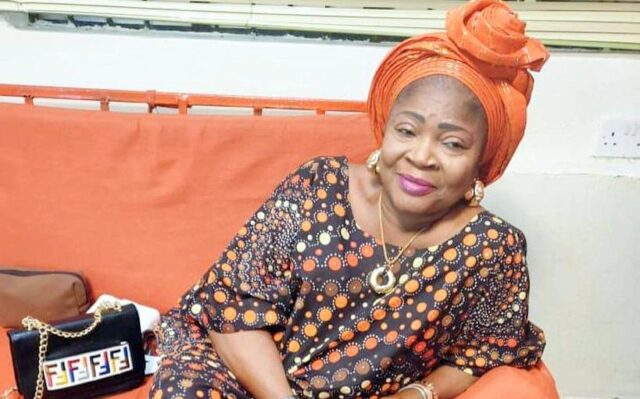 Salawa Abeni Alidu (born 5 May 1961) is a celebrated Nigerian singer and songwriter performing for over forty years. She is professionally known as Salawa Abeni.

She hit the mainstream in 1976 after a successful solo performance of the song “Late General Murtala Ramat Mohammed“.

Since then, she has continued to produce music that touches on various aspects of Nigerian life and culture.

Let’s take a sneak preview of some interesting facts about her career.

Salawa Abeni is an Ijebu Yoruba from Ijebu Waterside, in Ogun State, but was born and raised in Epe, Lagos state.

Aged 61 years, she was born on the 5th of May in 1961. In its simplest form, music is an organized sound. From ancient rituals to today’s blockbuster films, music has always been used to tap into and amplify human emotion.

Growing up, Salawa Abeni used to attend local concerts held in her vicinity; they were a way for her to connect with her community. She remembers the powerful feeling of seeing people come together from all walks of life to share in the joy of music. Today, she uses that same power to create connections with her clients as a DJ and event organizer.

At the moment, TheCityCeleb is yet to confirm the names and identities of parents and siblings.

At the moment, TheCityCeleb does not have many details about the educational background of Salawa Abeni. But according to sources, Salawa Abeni received her primary and secondary school educations in Lagos state.

Salawa Abeni has been married twice. She got married to her first husband named, Alhaji Lateef Adepoju, in 1986. Afterwards, she married another man, a Fuji star named Ayinla Kollington.

Salawa Abeni is a veteran singer, and her professional career began with the Waka Music Records in 1976.

In 1976, she released a solo track titled “Late General Murtala Ramat Mohammed“. It was the first Yoruba Songs to sell over a million copies in Nigeria, and a female singer performed it.

Salawa Abeni continued to record music for politicians until 1986 when she ended her relationship with the label’s owner, Lateef Adepoju. Instead, she married Ayinla Kollington and worked for his record label until 1994.

Salawa Abeni was also named the “Queen of Waka Music” in 1992 by Oba Lamidi Adeyemi, the Alaafin of Oyo.

Salawa Abeni has a net worth estimation ranging from US$1 million to US$5 million. The majority of her income was made from entertaining big men.