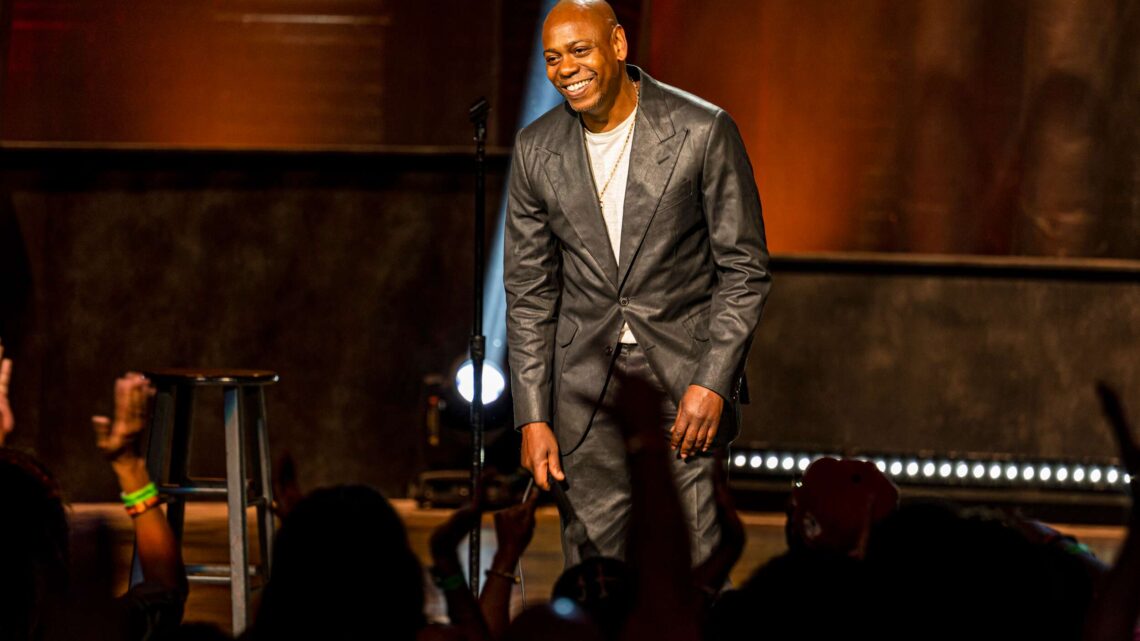 He is an award-winning artist, having won 3 Grammy awards, five Emmy awards, including the Mark Twain Prize.

He is famous for his contribution in co-creating, writing, and starring in the groundbreaking TV sketch comedy program “Chappelle’s Show” (2003-2006).

Dave Chappelle has also been tagged as one of the best. He is rated on some occasions; The best Comic Act from America.

He came from a family of Educationists as his father was a professor while his mother worked with universities under the capacities of both a professor and an administrator.

Due to his parent’s political activeness, they had famous visitors like Pete Seeger and Johnny Hartman, and it was reported that Johnny Hartman predicted Dave Chappelle‘s comedy career.

While in school, the young Dave Chappelle got inspired by the likes of Eddie Murphy and Richard Pryor.

After his parent’s divorce, Dave Chappelle stayed with his mother in Washington, where he could attend and graduate from Duke Ellington School of the Arts, where he studied Theatre Arts.

Dave Chappelle started his comedy act career when he was 14, as he first performed in public venues in Washington. At some point, his mother had to accompany him to perform in clubs, thereby acting as an adult guide.

He decided to boycott college to focus on his comic career after having a bet with his parents. He started by moving to New York City, where he met other comics who inspired and shaped him, for example, Charles Barnett, a comedian he met while performing on the streets of New York.

However, Dave Chappelle started his acting career as a theatre actor in the acclaimed Apollo theatre. But he got his first film role in 1993 for the Mel Brooks comedy Robin Hood: Men in Tight.

He went on to feature in other minor roles in movies but came to the attention of Hollywood following his role as Reggie Warrington in the 1996 Eddie Murphy‘s film, The Nutty Professor. Dave Chappelle also starred in several films such as Blue Streak, Screwed, Undercover Brother, including 1998 Half-Baked, which he co-wrote.

His most acclaimed work in the comedy industry is Chappelle’s Show which ran for 3 years (2003-06). During this period of stardom, he signed a $55 million contract with Viacom. The actor/comidian had a lot of ups and downs just like most celebrities during the course of his career, including rejection in several quarters, failed movie roles, rumors, and the likes.

However, amidst all these downturns, he got ranked in the list of 100 Greatest stand-up comedians of all time; by Comedy Central, peaking at Nō 43. This feat was accompanied by several other awards, especially the Grammy awards for the Best Comedy Album in 2017 for Equanimity and Bird Revelations in 2019.

Similarly, Dave Chappelle also got a Primetime Emmy Award for the outstanding Guest Actor in a Comedy Series (2018), including the Mark Twain Prize for American Humor which he won in 2019.

In present times, Dave Chappelle appeared in his sixth and final Netflix special, “The Close,” on October 5,2021.

Dave Chappelle married his longtime sweetheart Elaine Mendoza Erfe in 2001 after the duo dated for some years. They are blessed with two sons, namely Sulayman Chappelle and Ibrahim Chappelle, and a daughter Sanaa Chappelle.

The actor is a Muslim, having been converted in 1991. He also comes from a family of great Black revolutionaries and intellectuals of the old.

Dave Chappelle is not just good at putting smiles across people’s faces, but he is also good at making money from it.

He earns a lot from his comedy career, which added the proceeds from his acting roles gives Dave Chappelle a massive net worth of around $42 million.

The popular comic actor, Dave Chappelle has a significant spot on social media as his shows, and some video clips are posted for streaming by his fans. Thereby gathering a considerable number of fans and followers through reactions, comments, and shares.

Despite his diverse social media handles, the comic actor Dave Chappelle is hardly seen posting videos or tweeting as he has some time ago referred to social media as a “bathroom wall.”