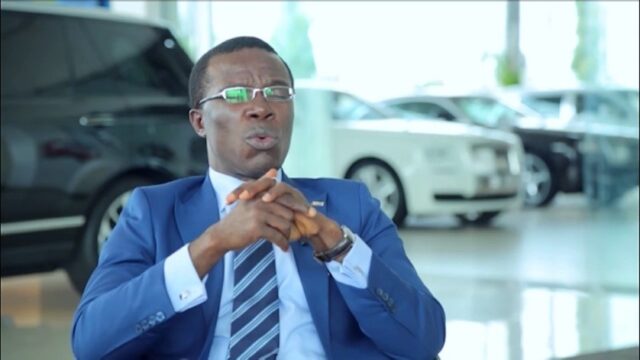 Cosmas Maduka CON (born 24 December 1958) is a Nigerian man with many hearts. He is a businessman and philanthropist. He is also the CEO and Chairman of the Coscharis Motor Group.

In the year 2015, Cosmas Maduka was featured on the Forbes Africa TV Series, which was themed Worst Day with Peace Hyde.

In the same year, it was reported that Cosmas Maduka has an estimated net worth of US$500 million.

Let’s take a sneak preview at some interesting facts about this multi-millionaire.

Cosmas Maduka was born on the 24th day of December in the year 1958. He was born and raised in a Christian home in Nnewi, Anambra State, Nigeria. He is aged 63 years old.

His father is called Peter Maduka, while his mother is simply known as Mrs. Rose Maduka. Cosmas Maduka began his entrepreneurial journey at the age of six, two years after his father died.

He reportedly dropped out of primary school and started hawking Akara, a popular Nigerian dish made by frying grounded beans. The dish is usually sold by the roadside. Cosmas Maduka did all of these side hustles to support his mother.

Cosmas Maduka reportedly dropped out of primary school at the age of six after the sudden demise of his father.

TheCityCeleb is still uncertain whether the businessman went back to school to complete his studies.

In the year 2015, Cosmas Maduka appeared on Forbes Africa Cover as the man who turned US$1 to US$500 million. In the same year, he was also featured in an exclusive interview for Forbes Africa TV Series, which was themed My Worst Day with Peace Hyde.

According to Cosmas Maduka, he loves playing and watching football during his leisure time. During an interview session, the businessman also revealed that he loves cars and motorcycles; he also said that his whole family is bikers.

Cosmas Maduka officially ventured into business at the age of 17 after being wrongly accused and laid off with a paltry sum of N200 by his uncle, whom he was learning the trade under as an automobile apprentice.

After some years of being dismissed by his uncle, he co-founded a spare parts company known as CosDave alongside his friend named Dave. The name CosDave was forged out of their personal names. Unfortunately, the startup company turned out to be a flop.

After the failure of CosDave, Cosmas Maduka went ahead and founded the Coscharis Motor Group with the sum of three hundred naira (N300), which focused on sales of automobile spare parts in the year 1977.

According to him, the company’s name is a combination of his first name, Cosmas, and his wife, Charity, whom he married at age 20. Cosmas Maduka‘s business breakthrough started in the year 1982 when the Nigerian government granted ten motor companies import licenses, and Coscharis was one of the selected companies that were licensed.

Cosmas Maduka is one of the leading CEOs in Nigeria with massive income. He has an eye-popping net worth estimation of US$1 billion.