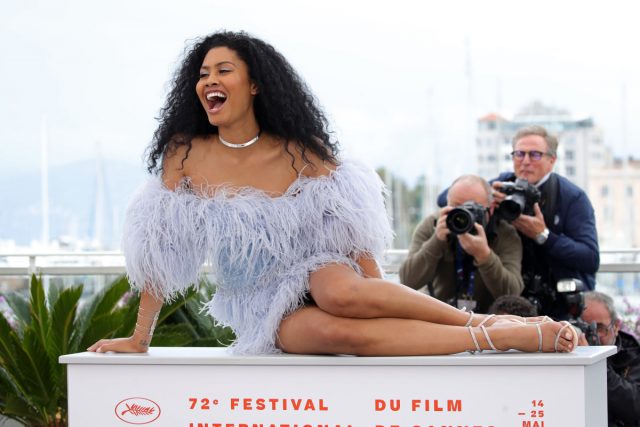 Also known as Leyna Ramous is the first transgender woman of color to appear in Vogue India.

Her notable achievement was when she became the first transgender woman of color to be featured in the Sports Illustrated Swimsuit Issue.

Bloom is the definition of vibrant energy and her face just gives away that sense of attraction to everyone. She is on the list of 17 Fashion Influencers of 2018.

Leyna Bloom was born on April 25, 1990, in Chicago, Illinois, United States. Her father is an African-American named Aaron Davis Jr while her mother is a Filipino. Bloom’s mother was deported when she was an infant. Leyna from a very young age knew that she was a woman and her father was totally in support of her gender transition.

Leyna Bloom was raised by her father and grandmother. Her attribute as a dancer can be traced to her family because she grew in the midst of dancers. Her grandmother owned a dance studio, her aunt is a dancer, and her cousin (Lee Howard) too is known for dancing.

She has two half-sisters Julia Davis and Sierra Davis. She also has a half-brother named Shaun Davis.

Leyna Bloom started dancing when she was in the sixth grade. She danced with the Joffrey Ballet in Chicago.

She then appeared for the American Ballet Theatre, sharing the stage with Misty Copeland when she was 14.

Leyna also received a full dance scholarship to the Chicago Academy of Arts but dropped out because it was a men’s scholarship.

Leyna Bloom has really had a successful career so far. Her limelight came for her when she appeared in a Candy Magazine cover feature on prominent trans women. Her openness towards her being a transgender hasn’t been made public before the limelight. Immediately she had this breakthrough, she made it known to the public about her transgender and her opinion towards it.

Leyna Bloom has featured in numerous campaigns for the likes of Gigi Hadid, Soo Joo Park, Stella Maxwell, Yasmin Wijnaldum and was named by Glamour in October 2018, as one of ‘6 Women Who Are Shaping the Future of Fashion.’

In October 2017, Bloom became the first openly transgender woman of color to appear in Vogue India.

Leyna Bloom launched a viral campaign on Twitter in 2018 by calling out for the inclusion of all body types on the sexy runway in the Victoria’s Secret Fashion Show. Thus gaining her international recognition and Victoria’s Secret being heavily criticized by professionals and journalists.

In March 2019, Leyna Bloom was the only transgender woman of color to walk Paris Fashion Week Fall/Winter 2019 at the Tommy Hilfiger x Zendaya fashion show in an all-black cast.

For many years, Leyna Bloom has been advocating for the rights of Transgender Women. She is working against a limiting society and tries to better the society that we live in.

Not much is known about her love life as the 29-year-old model is extremely focus on her career so it is not a surprise that her personal life has been kept quiet.

Leyna Bloom‘s dating life is opaque to the public as she hasn’t openly made known who her boyfriend, husband, spouse, partner or wife to be is. She has no son or children too. She is not married, if so, she hasn’t publicized it.

She did surgery to change her gender.

Leyna Bloom is an American-born actress and model. Leyna Bloom is believed to have a net worth estimation of $5 million. She makes her earnings from brand endorsements and Fashion Weeks.