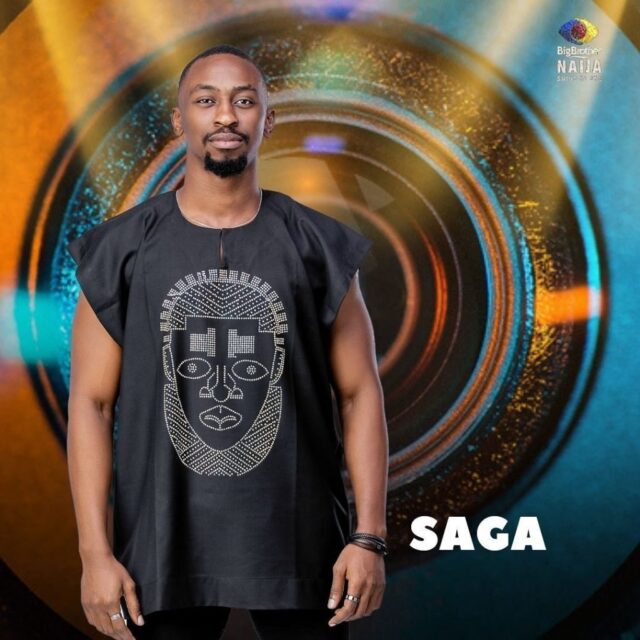 Adeoluwa Okusaga (March 15, 1993) is popularly addressed as BBNaija Saga, a shortened version of his first name.

He is a prolific engineer that is being sorted after by many multinational companies.

Saga is an engineer, a top-rated model, an uprising artist, and a fitness coach.

He is presently one of the twenty housemates in the popular Nigeria reality TV show; Big Brother Nigeria Season 6.

BBNaija Saga was born into a middle-income earner in Lagos State, Nigeria, and he grew up in the most populous city in the country.

His Dad is a banker in one of the commercial banks in the country, and he supported him to be a successful person.

Since his childhood, he has been determined to live with the motto “positive vibe only,” that is, no room for negativity for him.

According to him, this has been the driven force behind his numerous successes.

He is glad to have developed this philosophy about life earlier in life.

He has been passionate about pursuing a career in the entertainment industry.

That is why he has been developing and fine-tuning his artistic talents concomitantly with his engineering pursuit.

BBNaija Saga is a multi-talented individual that is richly gifted in drawing, dancing, singing, and flexible exercise, and this passion has become a source of income to him.

He has been enjoying the support of his family members tremendously in the quest of being a socially relevant individual.

BBNaija Saga had his primary and secondary education in Lagos State and proceeded to study Applied Science at the prestigious University of Lagos. He graduated with a second-class lower honor degree in 2016.

After graduating from the University, he proceeded to Halliburton as an intern to complete an Engineering course between 2017 to 2018.

During his learning period at the institution, he was opportune to land the big engineering job with Belemaoil Producing Limited, where he was given employment as a Well Intervention Engineer.

Upon his employment with Balemaoil in 2018, BBNaija Saga relocated from the country’s commercial city to the “oil city” Port Harcourt.

Despite being occupied with different engineering tasks at his place of work, Saga continues to develop his other talents like dancing, singing, drawing. He also focused more on exercising, which later made him a renowned fitness coach in Port Harcourt.

BBNaija Saga got auditioned for the popular reality TV show in port Harcourt. His talents graced him to be considered one of the twenty housemates for the Season 6 of the show dubbed “Shine Ya Eyes” out of the millions of people who auditioned.

A show that potentially increased his net worth by 90 million naira if he emerged as the winner.

Since he has been announced on the reality TV show as one of the housemates, BBNaija Saga‘s social media accounts have been experiencing an unprecedented engagement, and many fans have been following him unceasingly.

BBNaija Saga looks quite fit, and his physique makes a lot of ladies to be crushing on him.

He is based in Port Harcourt. Presently, Saga is not in any serious relationship. He said he only focused his attention on his career for now. So, he has no girlfriend or wife for now.

By working with one of the highest-paying companies in the country, BBNaija Saga has used his talent to earn additional income.