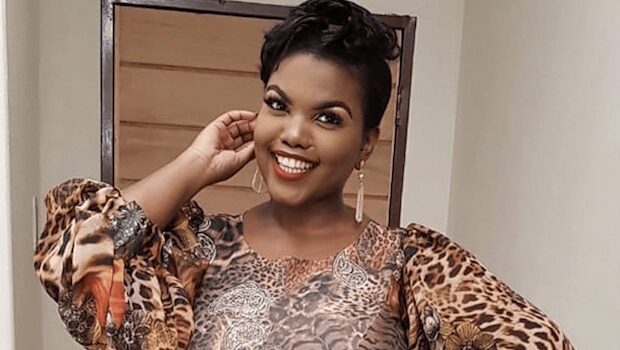 She was born on the 5th of April 1990 in Eastern Cape, South Africa but grew up in the busy city of Pretoria.

She finished her undergraduate studies in 2012 and currently holds multiple academic qualifications.

She is well known for her role as a Presenter on the Mzansi Magic TV series, Our Perfect Wedding.

Khanyisa Titus was born into a middle-class family in the Eastern Cape region of South Africa.

At seven, he moved to Pretoria with her family and spent most of her formative years in the capital city. She grew up with two of her siblings; a brother and a sister.

Khanyisa Titus‘s time in Pretoria opened up various opportunities for her to meet people. She made friends with elite children and became very outspoken and fluent in the preceding years.

The 32-year-old Presenter is also an academic prowess.

Prior to her recent educational endeavors, she had completed her undergraduate studies in 2012.

In 2017, Khanyisa attended the ‘Our Perfect Wedding Presenter Search‘ auditions with her cousin but failed to partake; due to a long wait in a warehouse filled with aspirants.

That year, Kayise Ngqula had won the auditions and made a debut on 21 January 2018 as the new presenter of the show, Our Perfect Wedding.

Khanyisa Titus failed to relent and seized an opportunity a few months later to join a talent agency, for voiceover activities. She became fortunate after her agent submitted her name for a 2019 audition.

Khanyisa got selected as the new Presenter of Our Perfect Wedding and debuted in the premiere of its Season 10 on 29 March 2020.

Her audibility and loveable personality have endeared her to many hearts in South Africa. The show which airs on Mzansi Magic has accrued more viewings and followership despite criticisms she received from some viewers.

The TV Presenter, Khanyisa Titus is a big-time shopper. She also spends time with friends and siblings after work hours.

Khanyisa Titus family, real husband, spouse even boyfriend name has been kept anti-social. The talented television presenter hasn’t for once talked about her marriage or relationship life.

The South African television personality, Khanyisa Titus has made an estimated net worth of $100,000-$250,000 for herself.