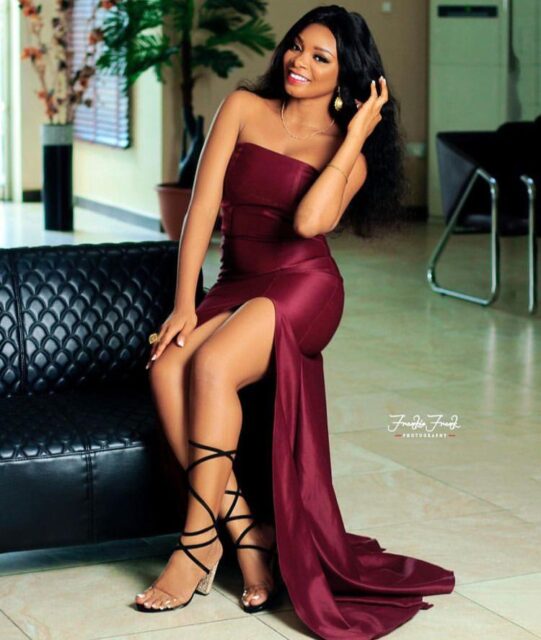 Queen Mercy Atang (born June 11, 1995), on her arrival at BBNaija, made a strong claim that wearing clothes is overrated and that people with beautiful bodies should be allowed to stay naked for their admirers.

There’s no other reason she could stake such a claim aside from the fact that she takes pride in her smooth and beautiful skin.

She also revealed that she is a no-nonsense lady, that if any housemates cross her line, she won’t hesitate to “bite.”

She is known to be a philanthropist and an aspiring politician.

BBNaija Queen Atang was born in arguably today’s most beautiful state in Nigeria, Akwa-Ibom, coincidentally her family is from the same state.

She originated from the Ibibio tribe in Eket South-south Nigeria. She is from the family of Mr. and Mrs. Okon Atang.

She has three siblings, which she bragged about all the time.

The most popular of her siblings are her brother Obong Atang.

According to Queen, being courageous, smart, and strong has been her major survival game ever since she was a child.

She got her compulsory certificate from the West African Examination Council (WAEC)and another Senior School Leaving Certificate.

Furthermore, she studied at the Tansian University, Oba-Umunya, where she obtained her first degree.

BBNaija Queen Mercy knows she is a beautiful woman, which is why she kick-started her career as a supermodel. Her beauty made her modeled for different brands and made a pretty good living out of it.

She moved on later with a better career as an entrepreneur.

She started off her own business immediately after school and was also followed by overwhelming success.
She later achieves her major goal in life by becoming a philanthropist.

Her dream and her ambition right now are to become a politician. She believes that she can help people.

Right now, the young beauty sensation is competing with other members of the Big Brother Naija Season 6 episode tagged Shine Ya Eye for the grand prize of 90 million Naira.

The prize money is to push her enterprise to greater heights further.

BBNaija Queen handles her social media fans pretty well with lovely photos. She dallies a lot on Instagram and Twitter.

She makes her hair short and sometimes wears wigs to cover. Her eyes are dark brown, and she has beautiful fair skin.

Guys crushing on this beautiful young wonder should be in for a disappointment because BBNaija Queen revealed that she is in a serious relationship with an unnamed man and is already taken. She is married.

Her goal is to win the Big Brother Naija competition.

BBNaija Queen has partly elevated poverty in her life with a handsome net worth estimated to be around $250,000.

In addition, she is an entrepreneur, businesswoman, and a successful philanthropist.