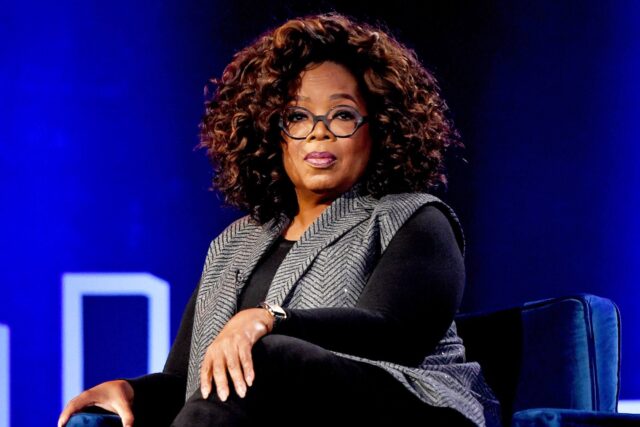 Though she was born into poverty, she aspired for greatness and achieved it. She is a multi-billionaire and philanthropist.

She achieved international fame because she was the host of the popular talk show, Oprah Winfrey Show.

The show ran for a quarter of a century (25 years) and was the highest-rated television show during its existence.

Asides from hosting a talk show, she is a TV producer, actress, and author. Due to her influence in the industry, she has been nicknamed the Queen Of All Media.

She is a very successful entrepreneur who sits as the Chairwoman of two companies, Harpo Productions, and Oprah Winfrey Network.

Oprah Winfrey was born out of wedlock on the 29th of January 1954. Her mother, Venita Lee was barely nineteen when she was born.

She was birthed in the town of Kosciusko, Mississippi. Though she was originally named Orpah after a biblical character in the Book Of Ruth, folks in her community mispronounced her name, calling her Oprah instead. The latter name stuck with time.

For the first six years of her life, she lived in the home of her maternal grandmother, Mrs. Hattie Mae Lee. Her mother had moved out of Mississippi shortly after her birth. She lived in poverty during this period because her grandma earned low-income wages.

She couldn’t even afford to wear thrifty clothes and had to make do with clothes made from potato sacks. It was her grandmother who taught her how to read before she clocked three. Mrs. Lee was a Christian so she took Oprah to her local church regularly.

When she turned six, she moved in with her mother in Wisconsin. Venita worked as a maid and her job demanded long hours of work. Thus, she didn’t have enough time to look after Oprah. In 1962, when she turned twelve, her mother sent her to live with her father who resided in Tennessee. This was because her mother already had another child, Patricia, and she was finding it hard to take care of both children.

Asides from Patricia, she has two other half-siblings. Her half-brother, Jeffery was an AIDS patient who passed away in 1989. Patricia died of cocaine addiction in 2003.

She was a victim of sexual abuse while growing up and the perpetrators happened to be close relatives – an uncle, cousin, and family friend. At the age of fourteen, she became pregnant with a child, a boy. However, the baby was born prematurely and died few minutes after his birth.

Oprah Winfrey spent the rest of her teenage years living with her father, Vernon, who was a disciplined man. He ensured that she took her education seriously and motivated her to pursue success.

Oprah Winfrey attended Lincoln High School, Milwaukee, briefly before she was transferred to Nicolet High School because of her good grades. She didn’t complete her high school education in the school because her mother sent her to live with her father.

At Nashville, she enrolled at East Nashville High School and graduated as an honors student. While in high school, she was a very popular student and was part of the drama team. She studied Communication at Tennessee State University. She was able to afford the fees because she had won a scholarship when she participated in an oratory contest.

Her first employment was at a local grocery store. A very beautiful woman, Oprah Winfrey competed and won the Miss Black Tennessee Contest at the age of seventeen. During her final year in high school, she was hired by a local black radio station, WVOL. She worked as a news reporter for the station on a part-time basis. After some years as a radio journalist, she decided to switch to Television. She was offered employment by WLAC TV based in Nashville. She anchored the news at the station and made history as the first black female anchor at the station. From 1976 to 1978, she held jobs as a news anchor and show host in the following stations: WJZ-TV (based in Baltimore) and WLS-TV (based in Chicago).

In 1986, Roger Ebert pitched the idea of hosting a show at his TV station to Oprah Winfrey. She jumped on the idea and signed a syndication deal with King World. The show originally named At The Movies was renamed The Oprah Winfrey Show. The show aired its first episode on the 8th of September 1986. The show had started off as a tabloid talk show but as the years progressed, Oprah began to talk about topics like geopolitics, spirituality, mediation, and heart disease.

The Oprah Winfrey Show was aired for twenty-five years (from 1986 to 2011). The last episode was shown on the 25th of May 2011. During its run, it was the most-watched talk show in the entire world, which made Oprah Winfrey a global star. This was why she was voted the Most Influential Woman In The World in 2007. Her 1993 interview with pop legend, Michael Jackson is the fourth most-watched event in American Television History. She is one of the biggest media moguls in the world and serves as the Chairwoman and President of Harpo Productions. She is currently the Chairwoman, Chief Executive Officer, and Chief Creative Officer of The Oprah Winfrey Network.

Oprah Winfrey is an accomplished author. She has co-authored five books and is the publisher of the magazines – O, The Oprah Magazine, and O At Home. A high achieving woman, she has diversified her wealth and has investments in the food companies like Weight Watchers and True Food Kitchen.

Oprah Winfrey is the first black multi-billionaire and held the position of the richest African American for many years. She currently resides in a 47-acre estate in Montecito, California. The estate is dubbed The Promise Land. She also has a house in New Jersey, an apartment in Chicago, and an estate in Florida, Miami.

She has maintained a long-term relationship with Stedman Graham. The two lovers had started dating in 1986 and have been together for the past thirty-five years. Though they were engaged to be married in November 1992, the wedding was postponed and it has never held since. Her best friend is Gayle King, who is the editor of O, The Oprah Magazine. The duo has been friends for a long time. Maya Angelou is one of Oprah’s mentors and close pals.

Oprah Winfrey has a beautiful height of 1.69 m.

The world celebrated multi-talented all-around personality, Oprah Winfrey’s net worth is estimated to be worth $2.5-4 Billion.