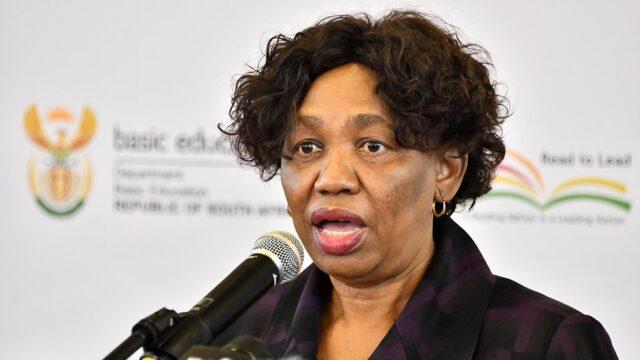 Angie Motshekga (conceived 19 June 1955) whose real name is Matsie Angelina Motshekga is currently the Minister of Basic Education in South Africa. She had held this position since 2009.

Angie Motshekga is a 67 years old politician and educator. She used to teach in high schools before she was appointed a lecturer. After which she advanced into politics.

Angie Motshekga was born in Soweto. A township in the city of Johannesburg in Gauteng, South Africa, on the 19th of June 1995.

She graduated from a boarding school in Matatiele and went on to the University of the North, where she obtained a Bachelor of Arts degree in Education.

Angie Motshekga also went ahead to obtain a Bachelor of Educational Science degree and a master’s degree, from the University of the Witwatersrand, Mota.

Between 1981-1983, Angie Motshekga taught at the Orlando High School. She tendered her resignation letter after being appointed a lecturer at the Soweto College of Education.

In 1985, she became a lecturer at the University of Witwatersrand. She lectured there for 9 years.

In the 1980s, Angie Motshekga was a member of the Soweto Education Crisis Committee that later formed part of the National Education Coordinating Committee.

She was also a member of the National Education Union of South Africa and the United Democratic Front.

Angie Motshekga was active in the Pimville Civic Association.

She was the National Convenor of Teacher Unity talks that led to the formation of the South African Democratic Teachers Union.
She was also the regional chair of the African National Congress Women’s League.

She worked as a director in the office of the presidency from 1994 to 1997 and was elected as the Deputy Provincial Secretary of the ANCWL in 1997.

After the 1999 general election,
In 1999 Angie Motshekga was sworn in as a member of the Gauteng Provincial Legislature and was appointed the chairperson of the legislature’s education committee.

In 2000, she was transferred to the Social Development portfolio of the Executive Council by Premier Mbhazima Shilowa.

Angie Motshekga returned for a second term in the legislature after the general elections of 2004.

In 2008, Angie Motshekga was elected the national president of the ANC women’s league.

In April 2009, Angie Motshekga was elected to the National Assembly.
The newly elected president Jacob Zuma then divided the Education portfolio into two new, separate ministries.

Angie Motshekga was then appointed Minister of Basic Education. She was sworn into office on the 11th of May 2009.

August 2015, she was overthrown from her position as Women’s League President.

By 2019, she became the longest-serving education minister in the history of South Africa.

Their marriage is blessed with children and grandchildren.