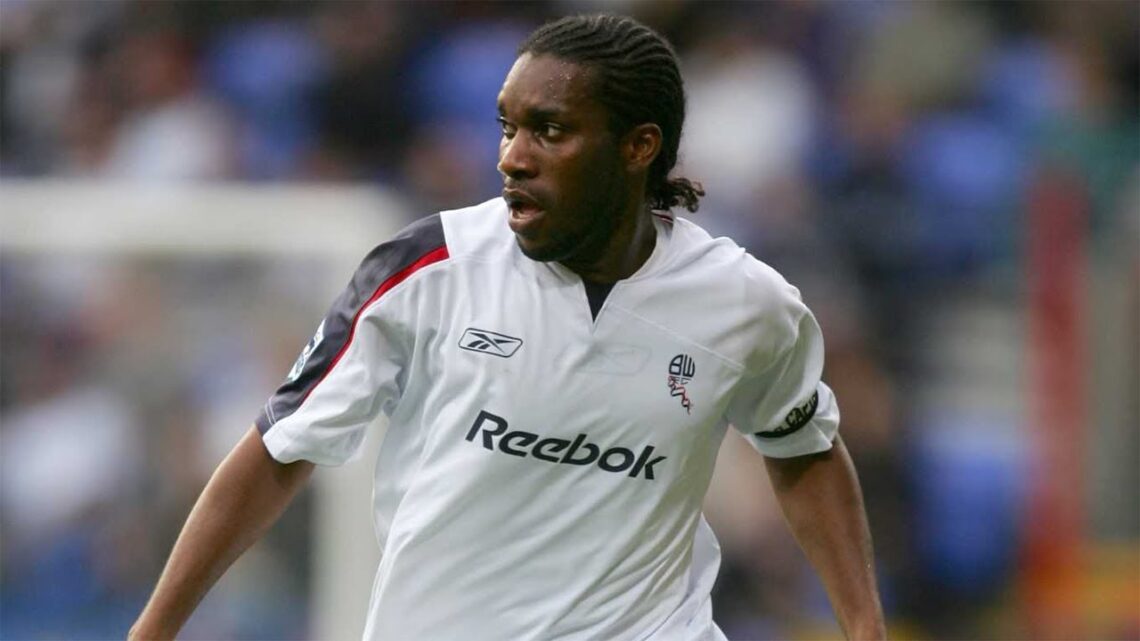 Augustine Azuka Okocha (born 14 August 1973), addressed professionally as Jay-Jay Okocha, is one of Nigeria’s greatest ever footballers. The attacking midfielder featured 73 times for the Super Eagles of Nigeria, dazzling and entertaining with his unrivalled array of skills.

The great man eventually retired in 2006, after over two decades of wearing the famous green and white of Nigeria. Jay-Jay Okocha is revered as one of the most naturally gifted footballers to ever play the game.

His talents took him to several top European clubs including Eintracht Frankfurt, Fenerbahce and Paris St. Germain, while he also captained English side, Bolton Wanderers towards the latter part of his storied career.

Jay-Jay Okocha was born to Mr. and Mrs. Azuka Okocha, on the 14th of August in 1973. He was born in Enugu State, Nigeria but originally hails from Ogwashi-Uku, Delta State Nigeria.

He has three siblings: Emmanuel Okocha, Renee Okocha, and Zara Okocha. Jay-Jay Okocha found love for footballing right from childhood. He endorsed the playing of football as profession featuring in local football teams and playing in the grassroots prior to being discovered.

Like most of his Super Eagles contemporaries, Jay-Jay Okocha began his playing career here in Nigeria, precisely with Enugu Rangers in Enugu State. Given the incredible talents he possessed, it wasn’t going to be long before he got snapped up by a European club.

His European football career began in a modest fashion, when he joined Borussia Neunkirchen- then a third division side in Germany, but he would soon leave for Frankfurt, where he truly made his name in German football. Jay-Jay Okocha spent four years in Frankfurt, from 1992 to 1996, before moving on to Fenerbahce in Turkey.

The former Super Eagles skipper played for the Istanbul giants between 1996 and 1998, after which he secured a big money transfer to French side, Paris St. Germain, following his exploits with the Super Eagles at the France 1998 World Cup. He would spend four years in the French Capital before teaming up with Sam Alladyce’s Bolton in 2002.

While Bolton wasn’t the most fashionable club Jay-Jay Okocha played for, he arguably made his biggest impact at the English side. He transformed the club from Premier League stragglers to a stable top-flight side, and led them to their first major final- the EFL Cup final in 2004 (lost to Middlesboro).

After four impactful seasons at Bolton, Jay-Jay Okocha moved on to Qatar, and then back to England with Hull City before closing out his club career.

Jay-Jay Okocha played for Nigeria for over 20 years, debuting in 1993 and retiring in 2006. He first played for the Super Eagles in 1993, featuring in a 2-1 defeat to Cote d’Ivoire in a World Cup qualifier.

He didn’t take long to make his first major contribution in an Eagles shirt, scoring in his second cap as Nigeria battled back from a goal down to defeat Algeria 4-1 in another crucial World Cup qualifier.

Jay-Jay Okocha was a major part of the Nigerian football team in the mid-90s- a very successful period for the national team.

With the Eagles, he won the 1994 Nations Cup in Tunisia, put up a creditable showing in their World Cup debut in the USA, also in 1994, when they reached the second round, and won the Olympic Gold Medal in 1996 (the under-23 team).

Jay-Jay Okocha continued to represent the Eagles for the next ten years after the 1996 Olympics success, featuring at two more World Cups (France 1998 and Korea/Japan 2002). He also helped Nigeria to a runners-up medal at the 2002 Africa Cup of Nations, and notably captaining the team to third place at the 2004 tournament in Tunisia.

Jay-Jay Okocha was not the most prolific goal scorer, but that’s very understandable given that his major role throughout his career was to create and assist goals. Having said that, he did put up some great numbers from his midfield position.

His most prolific return was at Fenerbahce, where he scored 30 goals in 62 matches, a strike rate most strikers would be happy with. Quite a few of those goals were from direct free kicks, which became something of a trademark with the midfield genius.

For the Super Eagles, Jay-Jay Okocha scored 14 goals in 73 appearances.

Quite surprisingly, Jay-Jay Okocha didn’t pick up too many major individual awards. He never won the African Footballer of the Year, let alone the World Player of the Year or Ballon d’Or.

At team level, his biggest achievement with Nigeria was arguably the Under 23 Gold Medal in Atlanta, while he was also a part of the AFCON winning team of 1994.

For a player of abilities, his trophy/award cabinet is quite modest. He didn’t win any major European league title, with his most notable trophies being the Trophee des Champions in France, and the UEFA Intertoto Cup in 2001.

Jay-Jay Okocha may be long retired, but he continues to be in-demand in the corporate world, with many brands seeking the services of one of Nigeria’s most iconic footballers.

He has been a brand ambassador for several brands, with his most popular association being betting company, Betking.

Thanks in part to their union with Jay-Jay Okocha, Betking has become one of the best betting sites in Nigeria.

Jay-Jay Okocha‘s great career, charisma and character makes him one of the first names on the list of potential brand ambassadors.

Jay-Jay Okocha is happily married to wife, Nkechi Okocha and the pair have been blessed with two kids: Ajay Okocha and Daniella Okocha.

After series of research, it is safe to say that the Nigerian football icon, Jay-Jay Okocha has accumulated an estimated net worth of US$15 million.