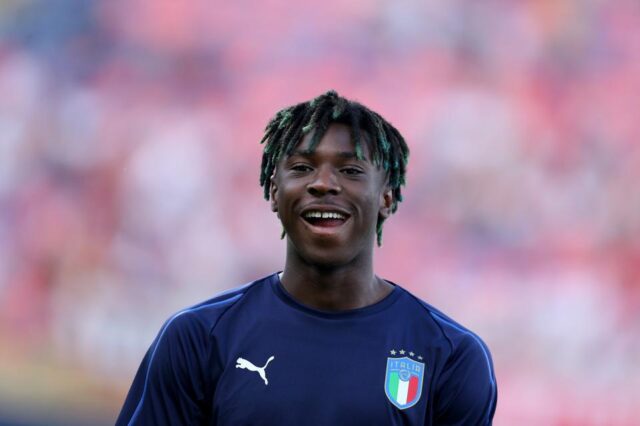 He plays for the Italian National Team at the international level and is currently a striker for the European club, Paris Saint-Germain (PSG).

He had been loaned out to the club by Everton, a Premier League club.

Although his full name is Bioty Moise Kean, he prefers to be called Moise Kean. He has Ivorian ancestry and was born to Mr. Biorou Keane and Isabella. He was born in the city of Vercelli. He is an Italian. He has two siblings (brothers).

His birth date is the 28th of February 2000. His family suffered a crisis when he turned four because his parents separated from each other. He and his brothers moved with their mother to a different city, Asti.

He spent his formative years in Asti and it was there his talent as a skillful footballer was discovered. He played in Youth teams in the city before moving to Torino. He had been discovered by Renato Biasi, a retired Italian goalkeeper.

At age sixteen, Moise Kean made his professional debut with the Italian giant, Juventus FC. This was in 2016. He scored his first goal for the club in 2017 during an away match against Bologna. Juventus ended up winning the match with a 2-1 victory.

He spent three seasons at the club (2016-2019) but was loaned out during the 2017-2018 season to Verona. He has appeared in sixteen Juventus matches and scored a total of seven goals.

At Verona, Moise Kean appeared in twenty matches and scored a total of four goals. His first goal for the club was at a 2-2 away draw match with Torino.

On the 4th of August 2019, Moise Kean completed a deal to join English Club, Everton, for €27.5 million. He played his first game for the club on the 10th of August in a goalless draw match with Crystal Palace. In January 2020, he scored his first goal for the club in a 2-2 home draw with Newcastle United.

At the international level, he has played for the Italian U-15, U-16, U-17, U-19, and U-21 teams. He is currently playing for the Italian senior team. He joined the team in 2018 and has appeared in eight matches, and scored two goals.

Moise Kean is very popular on social media, most especially Instagram. He has over 2.1M followers on Instagram.

His official IG handle is @moise_kean

Moise Kean is currently 22 years old. He is dark-skinned and has a tall build. He stands at 1.8m (6ft 0 in). He keeps dreadlocks.

His older brother, Giovanni is also a professional footballer. Growing up, he was a big fan of Nigerian, Obafemi Martins who played for Inter Milan at the time.

As a footballer, he earns a lot of money so he can afford to maintain a luxurious lifestyle. He resides in a posh apartment in France.

He is right-footed and has been adjudged to be a hardworking player. He loves to play the center-forward position. Blessed with a powerful body build, he is fast and tenacious whenever he is playing any game.

The Italian national, Moise Kean reportedly has a personal net worth of $3 million.