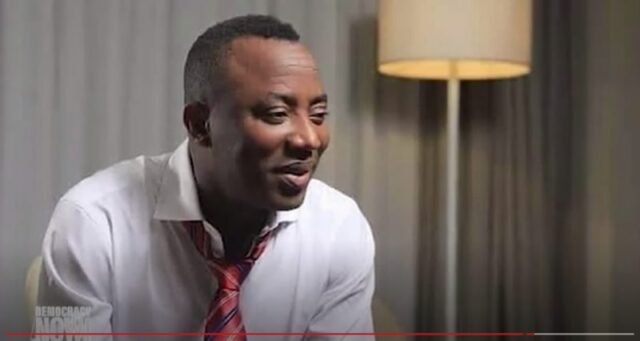 He became widely focused after being one of the youngest presidential candidates in the Nigerian 2019 election.

Omoyele Sowore was born on the 16th of February, 1971 in Ese Odo, Ondo State. He comes from a polygamous family and has fifteen siblings.

Between 1989 and 1995, Sowore studied for a BSc degree in Geography and Urban Planning at the University of Lagos. Due to his activism, his academic program was extended by two years by the university’s management. He was expelled twice due to his student activism and for political reasons.

From 1992-1994, he was the SUG president of the university where he partook in anti-corruption and anti-cultism advocacy.

Years later, he bagged a Master’s degree in Public Administration from Columbia University.

While in the University, he partook in student demonstrations across the country. The students were protesting against the conditions of a 120 million dollar IMF loan the government had decided to borrow.

In 1992, he led over 5,000 students in a protest against the government, in which the police opened fire on the protesters, killing seven of them. This led to Sowore being arrested and tortured by the police.

In 2006, Sowore started the online newspaper, Sahara Reporters in New York, USA. The paper was founded with a mission to fight against corrupt government practices.

Since its establishment, the online paper has exposed a lot of corrupt activities carried out by top government officials.

In February 2018, Sowore announced his candidacy for the Presidency ahead of the 2019 general elections. Together with other like minds, he founded his own party – the African Action Congress (AAC).

When the election results were announced in March 2019, Sowore came fifth overall.

On the 3rd of August, 2019, Sowore was arrested by the DSS and whisked to their secret facility in Abuja. This was because of his planned nationwide protest tagged, Revolution Now.

He was kept in detention for several months and was finally released on bail in December 2019.

Omoyele Sowore married his wife, Opeyemi Sowore in 2004. Their marriage is blessed with a son.

The 2019 Presidential candidate, Omoyele Sowore’s net worth is plugged at $10million-$30million.