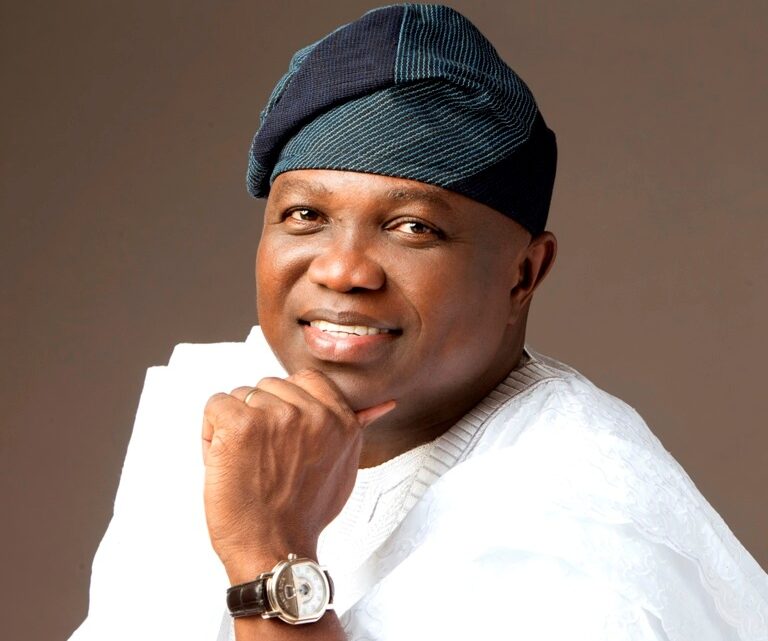 He ran for the office of Governor of Lagos State in April 2015 and won, defeating Jimi Agbaje of the major opposing party by 150,000 votes.

He is also the founder and CEO of Brandsmiths Consulting Limited; established to provide Public Finance and Management Consulting services to the government at all levels, its parastatals, and agencies.

Born at Epe General Hospital, Lagos State, Akinwunmi Ambode came into the world on the 14th of June, 1963. He was raised by his parents; Late Mr. Festus Akinwale Ambode and Mrs. Christianah Oluleye Ambode (nee Oresanya), and is the sixth of ten children birthed by his parents.

Akinwunmi Ambode‘s father; Mr. Festus Akinwale Ambode, worked as a teacher in a local school in Epe, before relocating to Lagos Mainland in 1967 for greener pastures. Ambode was four at the time.

Sadly, Mr. Festus Ambode passed on in 1981 and was survived by his wife and ten children. Mrs. Christianah Ambode, however, was a skilled Entrepreneur. She thrived as a tailor, putting her children through school.

Akinwunmi Ambode was also known for his brilliance across several borders. Many a time, he won accolades for his academic results, as well as his sporting performances.

After his seven-years stay at the College, Akinwunmi Ambode graduated with a very impressive result. He was also the second-best candidate in West Africa in the Higher School Certificate Examinations held in 1981.

During his time at secondary school, he joined the Hockey and Cricket teams and was also part of the now-defunct Bendel State Cricket team. Akinwunmi Ambodealso joined the Federal Government College, Warri Old Students Association (FEGOCOWOSA), and is an active member of the association to date. He was a two-time chairman of the Lagos State Branch, and, National President of the Association, for three consecutive years. In his time at the office, he worked with the alumni network to re-vigor the school’s learning conditions, executing major projects along the way.

Akinwunmi Ambode also schooled at the University of Lagos between 1981 and 1984, before graduating with a Master’s Degree in Accounting at 21. He also earned qualifications as a Chartered Accountant during that period. He served with the Central Bank of Nigeria, in Sokoto State.

Akinwunmi Ambode attended the Wharton School of the University of Pennsylvania for Advanced Management Programme; Cranfield School of Management, Cranfield, England; the Institute of Management Development, Lausanne, Switzerland; INSEAD, Singapore and the John F. Kennedy School of Government at Harvard University. He was also awarded the Fulbright Program scholarship for the Hubert Humphries Fellowship Programme in Boston, Massachusetts.

Akinwunmi Ambode‘s work as a civil servant dates back to thirty years ago. He was named Assistant Treasurer in Badagry Local Government, Lagos State, Nigeria, and worked for three years before being posted to Somolu Local Government as an Auditor. His exposure to various financial management and planning techniques has provided an edge for him over the years.

Akinwunmi Ambode‘s service to the Lagos State government was rewarded in January 2005, after he was appointed as permanent secretary of the Lagos State Ministry of Finance. He also served as accountant general for Lagos State, from 2006–2012, overseeing all financial responsibilities of the state, with over a thousand accountants, working under him.

It was also during that period the state’s financial turnovers were appropriated through effective budgeting and management of the State Treasury Office (STO).

In April 2015, Akinwunmi Ambode ran for the office of Governor in Lagos State, after securing membership of the All Progressives Congress political party. He won the election, defeating Jimi Agbaje of the major opposing party by 150,000 votes. He succeeded Babatunde Fashola and resumed office on the 29th of May, 2015.

Akinwunmi Ambode lost out in the gubernatorial primary election in 2019 to Babajide Olusola Sanwo-Olu, effectively ruling him out of running for a second term in office.

He founded Brandsmiths Consulting Limited in August 2012, after successful decades of public service. The aim of the firm is to provide Public Finance and Management Consulting services to the government at all levels, its parastatals, and agencies.

Akinwunmi Ambode got married in 1991 to Bolanle Patience (née Odukomaiya). He is also a father of twins; a boy and a girl.

The former Lagos State Governor is also a devoted Christian and is highly regarded for his goodwill gestures. In 2013, he started La Roche Leadership Foundation; a non-profit organization aimed at installing both the Nigerian and Lagos State flags in government-owned schools across the state.