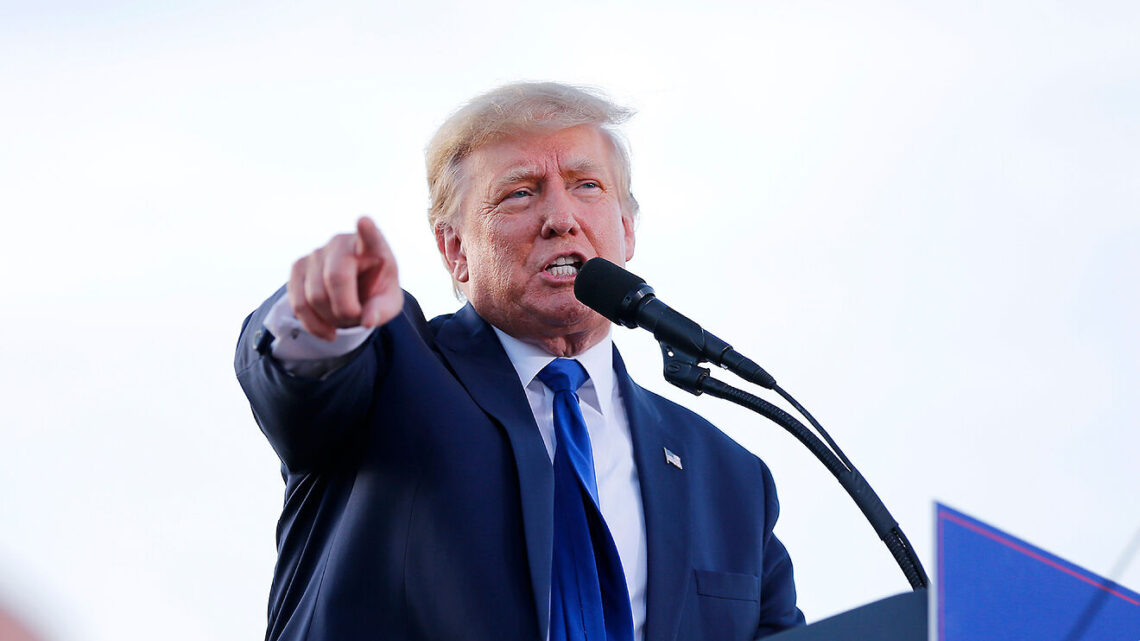 Donald John Trump (born June 14, 1946) is an American billionaire, business mogul, media entrepreneur, and politician who served as the 45th president of the United States Of America.

He is the former CEO and President of The Trump Organization, which is a leading real estate firm in the United States.

As a media personality, he was the co-producer and host of the shows, The Apprentice and The Celebrity Apprentice.

A philanthropist, Donald Trump  is the founder of The Donald J. Trump Foundation, which was established in 1988. He is also an author and has published nineteen books.

Donald John Trump was born on the 14th Of June 1946 in Queens, New York City. He was born into an upper-class family and is the fourth child of Fred Trump and Mary Anne MacLeod Trump.

Aged 76, he has German roots on his father’s side, as his paternal grandparents were German immigrants. At the same time, his mother had immigrated from Scotland, her homeland.

His father, Fred Trump, was a real estate developer who had built up a successful real estate business in New York City. The Trumps resided in the Jamaica estates neighborhood of Queens.

Growing up, Donald Trump  attended Sunday School with his siblings. In 1959, he was confirmed at the First Presbyterian Church, located in Queens.

For his elementary school education, Donald Trump studied at Kew-Forest School. He attended the school from kindergarten to seventh grade.

After that, his parents enrolled him at the private boarding school, New York Military Academy.

He graduated from high school in 1964 and gained admission into Fordham University. He only spent two years at the institution before transferring to Wharton School of the University Of Pennsylvania to complete his studies.

He graduated from the institution in 1968 with a Bachelor’s degree in Economics.

He was the one who renamed the company to The Trump Organization. He is credited for growing the business and expanding the company’s operations to include the building and renovation of skyscrapers, hotels, casinos, and golf courses.

The Trump organization bought the Commodore Hotel in 1978 and began renovating it. The hotel was reopened as the Grand Hyatt Hotel in 1980. Donald Trump purchased the New Jersey Generals with his funds in 1983. The team was a club in the United States Football League. But the team folded after the 1985 season.

He co-founded the Trump University in 2004. To interested buyers, the company sold real estate training courses (valued between US$1,500 – US$35,000). The company was renamed Trump Entrepreneur Initiative in 2010.

After recording success in the real estate sector, he decided to go into the media industry. He served as the host of the reality shows, The Apprentice and The Celebrity Apprentice (from 2004 to 2015). He was a co-producer of the shows. He was a former member of the Screen Actors Guild, joining the organization in 1989. He resigned from the Guild in February 2021.

He long times a member of The Republican Party since 1987. Donald Trump contested for the US Presidency in 2016 and was elected into office, defeating Hillary Clinton, the Democratic Party candidate. He was inaugurated as the 45th President Of The United States on the 20th Of January 2017.

However, Donald Trump lost his re-election bid for a second term in office to Joe Biden in 2020. Donald Trump didn’t accept the election results and refused to concede defeat. He claimed that the election was marred with widespread electoral fraud and instigated different lawsuits to prevent Joe Biden‘s inauguration into office.

Donald Trump was impeached by the House Of Representatives twice. Thus, he became the only federal officeholder in the country’s history to have been impeached twice.

He was first impeached in December 2019 for “Abuse Of Power and Obstruction Of Congress,” but he was acquitted of both charges by The Senate in February 2020.

In January 2021, he was impeached a second time for “Incitement Of Insurrection.” He was acquitted by the Senate in February 2021, after he had left office.

His political position has been described as nationalist, populist, protectionist, and isolationist as a politician. Donald Trump ordered a travel ban on citizens from several Muslim-majority countries during his presidency. He also spearheaded building a wall on the US-Mexico border and implemented a family separation policy for apprehended immigrants.

Donald Trump has published over nineteen books on finance, business, and politics working with ghostwriters. His first book, The Art Of The Deal, was published in 1987. The book, which is a New York Times Bestseller, was co-written with Tony Schwartz.

During his presidency, Donald Trump was an active voice on the social media app Twitter. But he was banned from the platform by the company in 2021.

He has over 23.5 million followers on his Instagram page.

Although Ivana Trump became a naturalized citizen of the United States in 1988, she and Donald Trump divorced in 1992. The divorce resulted from Donald Trump‘s affair with the actress Marla Maples.

Donald Trump gave marriage a shot for the third time by marrying Melania Knauss. Melania Trump is a Slovenian model, and she is the mother of Donald Trump‘s fifth child, Barron Trump. Barron Trump was birthed in 2006.

Donald Trump resides in Mar-a-Lago, in Palm Beach, Florida. He had purchased the estate in 1985, and by 1995, he had converted it into a private club. Donald Trump uses a wing of the estate as his private residence.

The business mogul has made a fortune from investing in the real estate business and media industry.

Donald Trump‘s net worth is estimated to be worth between US$2.5 billion to US$3.5 billion.