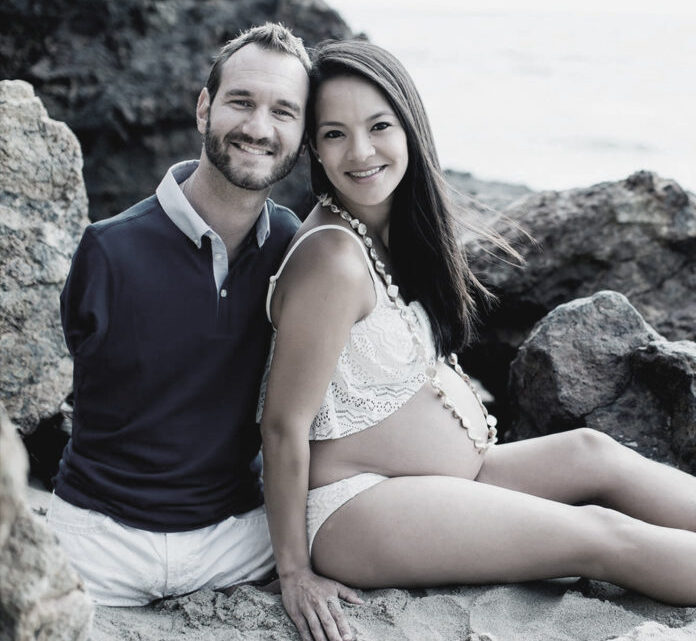 Nick Vujicic (born December 04, 1982) whose real names are Nicholas James Vujicic is a born speaker that has inspired millions of lives across the globe with his teaching and books.

He was born without limbs, and instead of using that as a condition to be mediocre in society, he turns it to inspire people that we are not bound with obstacles.

He is widely known for his teaching of the word of God. He has authored over ten books that centered on determination.

In addition, he is a renowned motivational speaker and itinerant evangelist.

Nick Vujicic was born in Australia, and he was born without Limbs.

He was born on the 4th of December in 1982. His parents were immigrants from Yugoslavia.

Due to the weird and rare condition surrounding his birth, multiple sources reported that the woman who gave birth to him, his mother, was reluctant in holding him and he was left abandoned for hours in the place he was born.

Without mincing words, it is customary to say that Nick Vujicic had a challenging childhood experience because of his physique state, which hindered him from participating with his peers in doing some things and hindered his education state.

However, the exciting part of it is that the celebrated evangelist turned his condition to a positive state by becoming a well-known inspiring speaker in the world.

Nick Vujicic graduated from Griffith University at the age of 21 with a Bachelor of Commerce degree, with a double major in accountancy and financial planning.

On the quest of impacting the world, in 2005, Nick Vujicic founded Life Without Limbs, an international non-profit organization and ministry.

Though Nick Vujicic holds a degree in commerce, he didn’t go into that, he ventured into acting and authoring of books, and he is also a famous evangelist who uses his life to inspire others not to give up.

As an evangelist, he always talks about faith, that is, people should believe. The celebrated author has written over ten books and spoken in over 30 countries across the world.

The gifted evangelist, Nick Vujicic has over 1.6 million followers on Instagram and over 200K followers on Twitter, and people are usually eager to follow him to get inspired.

The talented speaker, Nick Vujicic moved to California in 2002 and was fortunate to meet his wife, Kanae Miyahara, in 2008 in McKinney, Texas, near Dallas.

Nick Vujicic resides in Southern California with his family, and he keeps writing and inspiring people from there. His parents are Boris Vujicic and Dushka Vujicic. He also has two siblings who are Aaron Vujicic and Michelle Vujicic.

Nick Vujicic is a blessed and hard working man. Regardless is situation, the author net worth is valued at $2 million.