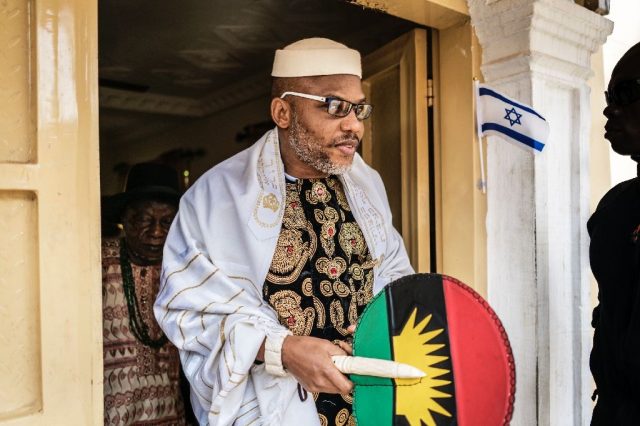 He is also regarded by the Nigerian government as a separatist who is also a British citizen.

He is a dedicated political economist. However, he is zealously leading the indigenous people of Biafra, generally know as IPOB which he founded in 2014.

Nnamdi Kanu was born in Isiama Afara Ukwu, a small town in Umuahia, Abia State in the southeastern part of Nigeria.

His father is a king. He is a traditional ruler of Isiama Afara Ukwu. He was born in 1967 on the 25th of September.

After his Bachelor’s Degree and Master’s Degree in Political Science, he proceeded to the United Kingdom to further his education.

While in the UK he attended London Metropolitan University and obtained a doctorate degree in Political Science.

After completing his primary and secondary school education, Nnamdi Kanu attended the University of Nigeria Nsukka and graduated with a Bachelor’s Degree and Master’s Degree in Political Science before proceeding to the United Kingdom to further his education.

While in the UK he attended London Metropolitan University and obtained a doctorate degree in Political Science.

Nnamdi Kanu’s pronounced strategy has been the application of civil disobedience in pressing home his demand for the freedom of his people.

He is the director of a UK-registered radio station named Radio Biafra.

On 5th September 2015, Nnamdi Kanu was a guest speaker at the World Igbo Congress which was held in Los Angele, California in the United States of America, where he told his audience, “we need guns and we need bullets to earn our freedom.”

In an interview in June 2017, he explained his comment saying that he demanded bullets and guns from a group of US-based Nigerians for self-defense against the incessant attacks on Igbos by Fulani herdsmen which were currently reoccurring in Biafra lands.

On 14th October 2015, Nnamdi Kanu was arrested in Lagos and charged for treason by President Muhammadu Buhari government. He was detained for more than one year, despite various court orders that ruled for his release.

When in court, Nnamdi Kanu appeared regularly wearing a Jewish prayer shawl and head covering. He said in court, that he believes in Judaism and considers himself a Jew and oftentimes has led his Biafran people to various Jewish prayers and religious observations

In June 2021, Nnamdi Kanu was rearrested and brought back to Nigeria. He was intercepted on June 27, 2021.
He is expected to be re-arraigned before the Federal High Court for the continuation of his trial.

This was made known at a briefing in Abuja on Tuesday by the Attorney-General of the Federation, Abubakar Malami.

The famous, influential freedom fighter, Nnamdi Kanu has one of the most active social media pages in the world. He has over 1million followers on Twitter.

Nnamdi Kanu was born in Isiama Afara Ukwu, a small town in Umuahia, Abia State in the southeastern part of Nigeria. His father is a king.

He is a traditional ruler of Isiama Afara Ukwu. His father’s name is Eze Israel Okwu Kanu (JP) while his mother’s name is Ugoeze Nnenne Kanu.

Nnamdi Kanu is married to Uchechi Kanu and blessed with a baby boy who was delivered in an undisclosed hospital.

He has two children – two sons. The name of Nnamdi Kanu’s son is Nnabuikem Nnamdi Okwu Kanu which he had with his wife, Uchechi Okwu Kanu, and another one he had with another lady before marrying Uchechi Okwu.

Nnamdi Kanu and his wife, Uchechi Okwu Kanu welcomed their first child together on January 5th, 2016. His son was born in the United Kingdom.

He celebrated his son’s 5th birthday on 5th January 2021.

Nnamdi Kanu is very famous and influential. He has accumulated an estimated net worth of over $70 million.

He is the director of a UK-registered radio station named Radio Biafra.