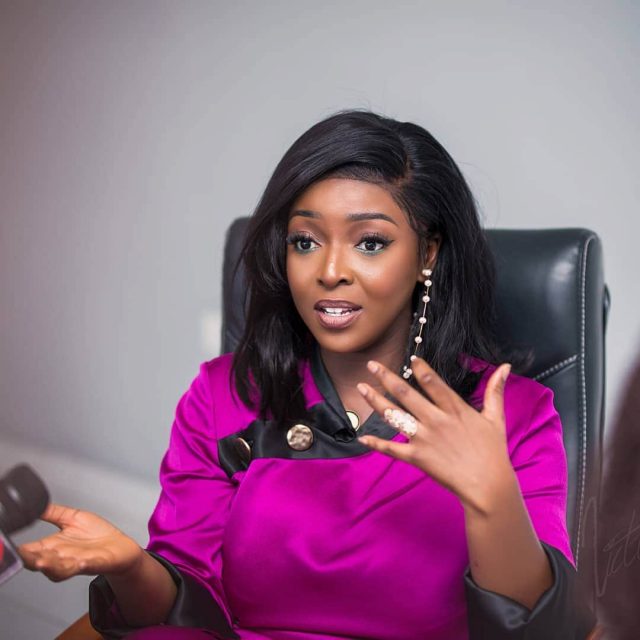 Her mother is a Ghanaian which granted her the dual citizenship she shared in the African countries.

She showed her desire to become an actress from a very young age. Yvonne Okoro is also a filmmaker, model and television personality.

Yvonne Okoro was born and brought into the world in 1984 which happens to be on the 25th of November.

She grew up in Ghana, where she attended Achimota Preparatory School where she later proceeded to the Lincoln Community School.

Since she was a school lover, she then went to Faith Montessori School.

For her secondary education, Yvonne Okoro attended Mfantsimen Girls Secondary School, after which she got enrolled at the University of Ghana, Legion where she did Bachelor of Arts.

She was also in France to study Press Civilization, Drama and Marketing.

Yvonne Okoro kick-started her career in 2002, after her senior high education, she made her screen debut in Sticking To The Promise, a movie produced by Theo Akatugba, a Nigerian movie producer.

She was also part of the hot series, Tentacles, where she played a cameo role for the same producer and for Point Blank Media Concepts.

In 2011 and 2012, she was nominated twice in a row for the Africa Movie Academy Awards for her movies, Pool Party and Single Six. Still in 2012, Yvonne Okoro was honored with a Distinguished Achievement Award at the Nigeria Excellence Awards.

In 2014, she received the City People Entertainment Award for the Face of Ghana movies.

In 2016, she also received the City People Movie Award for the Best Actress of the Year (Ghana).

Actress Yvonne Okoro is currently the host of Dinning with cooks and braggarts, a celebrity cooking show that features well known figures to mint their hands on how they cook their favorite foods.

She also owns her company, Desamour Company Limited, as well as other transport business.

Yvonne Okoro donated to the Black Queens of Ghana in 2019, ahead of the 2019 WAFA tournament.

She has never been rumored to have a boyfriend, husband or spouse to be. She neither have children too.

Since the case is like this, we are forced to concluded that Yvonne Okoro is not married and has flaunted no relationship on the media space.

As one of the most respected and adored Ghanaian Nigerian actresses in the movie industry, Yvonne Okoro has accumulated an estimated net worth figured at $400,000.