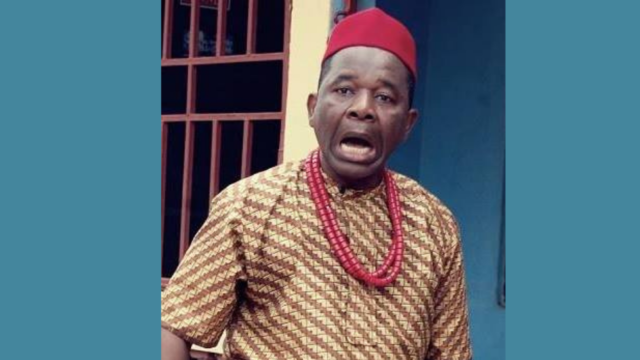 He is a veteran Nollywood Nigerian actor, comedian, and television personality.

He is one on-screen character who has carved a niche for themselves. Even though vulgar but hilarious, Chiwetalu Agu‘s slangs are in-jokes judging from his roles in Nollywood films.

Christian Ogbonna Chiwetalu Agu is a veteran Nollywood actor and comedian. He is famous for his fluency in the Igbo dialect and his slangs in his movies.

He attended the College of Immaculate Conception, Uwani, for his secondary education and gained his WASSCE certificate there in 1977. He obtained a Bachelor’s degree in Dramatic Arts in 1981 at Munchen College, Germany.

Chiwetalu Agu, as similar to other actors, started developing his talent at a very young age. He underwent his compulsory one-year service to his country in Jos.

After his service, he staged tons of performances with his group, the Inspirers Theatre Group, which he formed in 1983. He also worked at NTA, Enugu, after which he ventured into acting full time as a career.

Chiwetalu Agu has featured in the movie Things Fall Apart, the famous novel written by the great writer Late Chinua Achebe, Sunrise, Old School, and many others.

He has worked alongside celebrity stars like Ireti Doyle, Patience Ozokwor, widely known as Mama G, Pete Edochie, and many others.

Due to his skills and professionalism, he was recognized as the Nollywood developer by Professor Femi Shaka of the University of Port Harcourt.

Chiwetalu Agu has also been given awards like the Best Actor in an indigenous Movie. He won that award for speaking the Igbo dialect in the movie- Nkwocha and a handful of nominations.

Chiwetalu Agu is married to his wife, Nkechi Agu. They have five children– three sons and two daughters. Two of his sons names are Christian Agu and Emeka Agu while his daughters’ names are not figured out.

He is a native of Amokwe in Udi Local Government Area, Enugu State, Nigeria.

Chiwetalu Agu has won and been nominated for several awards, including:

There is a record of at least 150 movies in which Chiwetalu Agu has been cast.

You cannot mention the highest-paid honchos in Nollywood without enlisting him. Chiwetalu Agu has an estimated net worth of US$800,000.