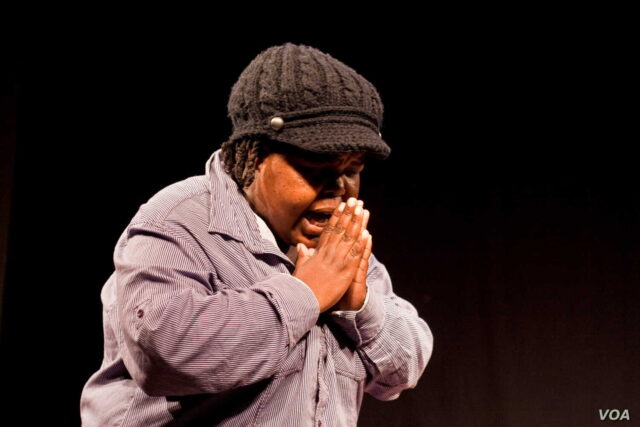 The popular comedian is known nationally for her stand-up comedy routine and has performed in several comedy concerts across South Africa.

She is well known for making thousands of fans laugh owing to her style of comedy, her unique style of delivery, and her highly relatable comedic content.

Khanyisa Bunu was born on the 12th of August in the early 1980s. She was born and bred in the Eastern Cape region of South Africa.

She was raised by both parents in a modest household. As a child, she has the uncanny ability to make people across all ages including her elders, juniors, and age mates.

She was bullied and made fun of as a child because of her stature but she never took the naysayers seriously. Today, she has made a name for herself in South Africa.

Khanyisa Bunu started her career as a secondary school teacher. She taught the use of the English language and Geography. She was not satisfied with teaching and decided to leave the teaching job after teaching for close to a decade.

Immediately after resigning, she left Eastern Cape and moved over to Johannesburg to pursue a career in comedy. She took part in the audition for the South African Broadcasting Corporation stand-up comedy competition titled, So You Think You Are Funny.

This was her first foray into the Comedy arm of the South African entertainment company. She was eliminated in the later stages of the competition but the experience she gained built the bedrock for her career in comedy.

Asides from comedy, Khanyisa Bunu is an excellent writer and actress. She has written a large number of articles for several South African newspaper companies and in 2013. She wrote her first novel titled, Umbhodamo. Her book received positive reviews and is a compulsory book for South African 8th and 9th graders.

Khanyisa Bunu portrayed the role of Nobuhle in the fourth season of the South African show, Ses Top La. She has also appeared in several South African television series.

She received this accolade during the 2015’s Savanna Comic’s Choice Award Event.

Khanyisa Bunu is active on Twitter and Instagram. She posts pictures of herself and her upcoming shows for fans and she has a large online fanbase.

Khanyisa Bunu is currently married and has children. The South African comedian is a very private individual and has refrained from divulging information about her family to the public.

The talented South African comedian and on-screen personality, Khanyisa Bunu has accumulated an estimated net worth of $40,000-$70,000.