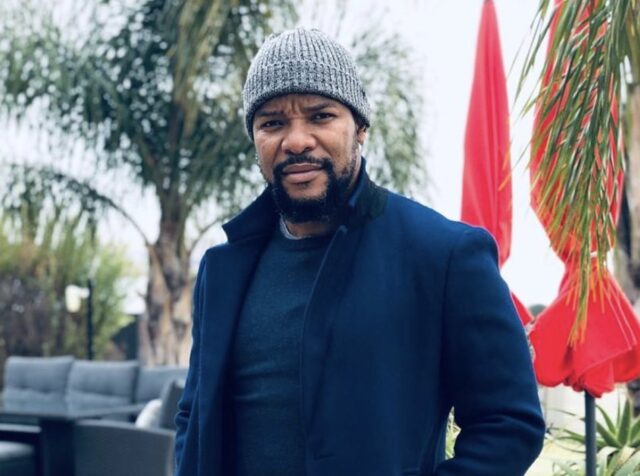 He has been one of the dominating actors in the South Africa entertainment industry since 1995 that he made his debut in the acting role.

He has featured and directed many dramas and series. He is popularly recognized for his role as Derek Nyathi in Isidingo (1998–2001).

His father, Mvume Dandala, is a well-known person in society because he previously worked as the Presiding Bishop of the Methodist Church of South Africa.

He also served as the head of the All Africa Conference of Churches.

The family name can be said to have contributed to his way to stardom.

His relative supported him, especially Gqibelo Dandala, who introduced him to many things and people in the industry.

Thus, Hlomla Dandala enjoyed the supports of his family, and this made his way to fame relatively easier.

His dream for South Africa is to for the country to be the first state in the United States of Africa.

Hlomla Dandala attended the Sacred Heart College for his secondary school, and after graduation, he proceeded to the Johannesburg Wits University, where he graduated with a top grade.

Hlomla Dandala started his career in the entertainment industry in 1995 but is best known for his roles as Derek Nyathi in Isidingo (1998-2001), title character Jacob Makhubu in Jacob’s Cross (since 2007), and host of All You Need Is Love from 2002-2003.

The famous actor currently stars in Rockville as Gomorrah, the main antagonist of the third season and e.tv’s prime time soap opera, Scandal! as Kingsley Siseko Langa from 2016.

Hlomla Dandala has over 16K followers on Instagram, where he interacts with his teeming fans.

Hlomla Dandala was married to TV presenter Candy Litchfield. He has five children, but only three are known publicly as their names have been released to the media; Ziyanda Dandala, Tao Dandala, Sam Dandala.

Hlomla Dandala got divorced from his first wife, Candy Litchfield, in 2013 after an allegation of having children out of wedlock surfaced.

He speaks four languages: Afrikaans, English, Xhosa, and Zulu. He likes to ride a motorbike for relaxation.

The renowned South African actor and director, Hlomla Dandala has accumulated an estimated net worth of $250,000 – $500,000.

What Is Dollar to Naira Today? (Black Market & Bank Rate)