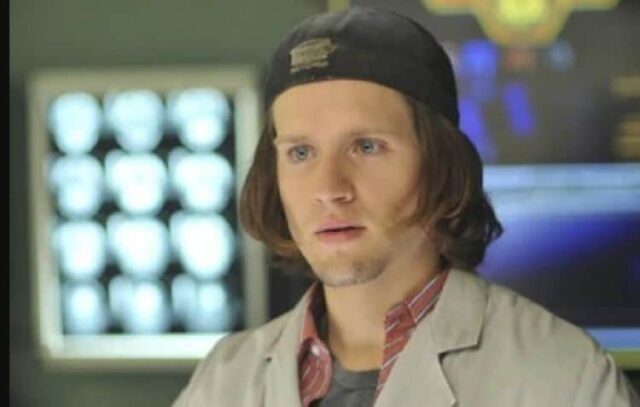 Luke Kleintank (born 18 May 1990) is a super talented American actor.

After starring as Finn Abernathy on Bones, Joe Blake in the Amazon series, and Tyler Harne in the 2015 production titled Max, he got the celebrity’s attention.

He is one of the sought after actors in the American industry.

Luke Kleintank was born on 18 May 1990 in the city of Cincinnati, Ohio- a state of the United States of America.

On his father’s side, he is of Dutch and German descent.

His parents are Roger Klientank (father) and Melody Klientank (mother).

Luke Kleintank has three brothers and two sisters with whom he grew up with.

He also has ten nieces and nephews, although their names are not known to the media.

His great grandfather named Antonius Klien Tank (later switched to Klientank), was born in the year 1827 in the municipality of Lichtenvoorde, located in the Netherlands, and later moved to Cincinnati in 1846. He was married to Catharina Adelheides Messink who hails from Nordhorn in 1854.

When he was two years old, Luke and his family relocated to Guadalajara, a city in Mexico where he lived for three years.

There (in Mexico), he learned to speak English and Spanish fluently before moving to Stevensville, Maryland, where he lived for 12 years.

Details of Luke Kleintank‘s educational background and qualifications are under review by our team and posted here as soon as obtained.

Luke Kleintank is into acting. His mother introduced him to the profession when he was just five years old.
He debuted in a play titled Carnival, which paved the way for him to play roles in plays and community theatre.
He also took part in numerous stage production while in high school to improve his acting skills.

Luke Kleintank left home to New York City to fully pursue his acting career, where he got his first television appearance as Greg in the 2009 episode of Law And Order: Special Victims Unit. In 2010, he acted as Elliot Leichter in a recurring role on Gossip Girl.

Then he relocated to Los Angeles, where he landed what would be his first daytime role, debuting as Noah Newman in The Young and The Restless, which was released on 21 September 2010.

In 2011, Luke Kleintank was listed amongst the cast of the Fox series Bones as Finn Abernathy. In 2013, he had a minor recurring role in the CBS series titled Person Of Interest as Caleb Philips. He also played the recurring character of Travis in the ABC Family teen drama series, Pretty Little Lies from 2013 to 2014.

He starred in the 2015 film titled, Max as Tyler Herne. He also played the role of Nazi agent Joe Blake in the Amazon series, The Man In The High Castle from 2015 to 2018.

In 2019, Luke Kleintank starred as Nick Holland in Crown Vic, Platt Barbour in The Goldfinch, and Clarence Dickenson in Midway.

In mid-2021, Luke Kleintank announced to the joy of fans that he would be playing FBI Special Agent Scott Forrester in the CBS crime drama series, FBI: International.

The actor post amazing pictures of himself to keep his fans posted about his development.
Luke’s varified handles are as follows;

Luke Kleintank is quite the ladies type, his height measured at 6 feet 0 inches (183 CM) is an influential factor. The actor weighs 74kg (163Ibs) with an athletic body type and a toned physique. His eyes are blue, and his hair brown.

Luke Kleintank is not married. However, he is engaged to the beautiful Christiana Vignaud, the daughter of a diplomat named Juan Carlos. The couple got engaged in the winter of December 2018.

Luke Kleintank has carved a niche for himself in the American film industry. He is a household name and an influential actor at that.

His hard work and influence have seen him garner a net worth estimated at $1 million. More earnings are expected from this young lad in the coming years due to his age and increasing influence.

Luke Kleintank is a veteran actor who has starred in numerous American films and Television series.
Below is a list of Luke’s filmography.