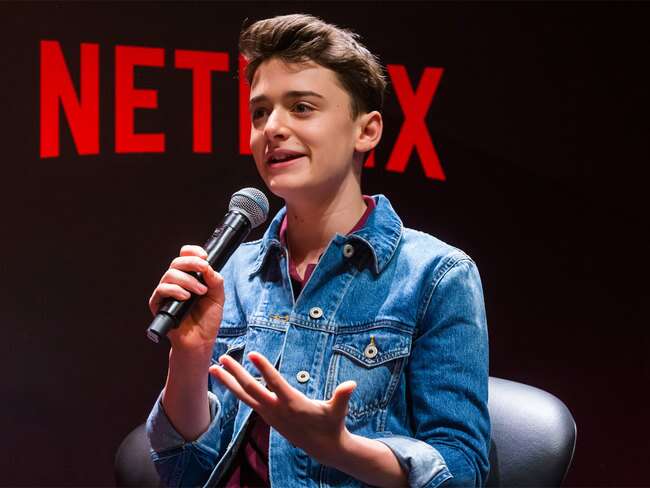 The handsome teenager broke into the movie scene when he was cast in the film, Bridge Of Spies in 2015.

He currently plays the role of Will Byers in the Netflix sci-fi TV series, Stranger Things.

He joined the drama series in 2016. Due to his excellent performance in the series, he won the Best Performance In A Digital TV Series or Film (Young Actor Category) in 2017.

Noah Schnapp has Canadian, Jewish, and Moroccan roots. Though his parents are originally from Quebec, Canada, Noah was born in New York City on the 3rd of October 2004.

He was raised in Scarsdale, located in Westchester County. His parents are Mr. Mitchell Schnapp and Mrs. Karine Schnapp. He is the first child of the family and has a twin sister named Chloe Schnapp. Noah’s parents are Jewish and raised him in the Judaism faith. In 2017, he traveled down to Israel to have his Bar Mitzvah. He was thirteen.

Noah Schnapp‘s interest in acting started at the tender age of five after he watched the Broadway production of Annie. He had impressed by the acting of the characters of the play that he began fantasizing about becoming an actor. He told his parents about his dream and they gave him the necessary support.

They hired an acting tutor for him. He started off by acting in school plays and community dramas, horning his skill gradually. It was his acting teacher who advised his parents that he was gifted and could pursue a professional acting career. This advice prompted his parents to enroll him in an acting program organized by Star Kidz School based in Westchester.

Noah Schnapp completed his elementary school education in Scarsdale, Westchester. He studied at Star Kidz acting School where he was taught by Coach Alyson Isbrandtsen.

For his high school education, he is currently home-schooled by a group of qualified tutors.

Whilst Coach Alyson was training Noah Schnapp to become a good actor, he advised his parents to reach out to the casting agency, MKS&D Talent Management to help him get jobs. His parents heeded the advice and signed a fair deal with the agency.

This move was productive as Noah got his first movie role in 2015. He voiced the character, Charlie Brown in the anime film, The Peanuts Movie. His first onscreen performance was in the film, Bridge Of Spies. The historical movie was produced by the iconic director, Stephen Spielberg.

The film gave Noah Schnapp the opportunity to work with some of Hollywood’s big names such as Tom Hanks, Mark Rylance, Amy Ryan, Alan Alda, Austin Stowell, and Eve Hewson. Due to the way he played his role excellently in the movie, he was called up by the producers of Stranger Things to join its cast.

He received this invitation in 2016. The film is a Netflix sci-fi TV series, where Noah plays the role of Will Byers. The drama series has given him the opportunity to work with other talented actors such as Caleb McLaughlin, Millie Bobby Brown, Finn Wolfhard, Gaten Matarazzo, Natalia Dyer, and Charlie Heaton.

He has starred in all three seasons of the series. In 2016, he played the role of Lucas in the movie, The Circle. Noah Schnapp had the opportunity of starring in two blockbusters in 2018. He acted in the roles of Otis Copeland and Kai in the movies, We Only Know So Much and The Legend Of Hallowaiian respectively. The latter is an anime film. He starred in two episodes of the TV series, Liza On Demand, where he was given the job of playing the character, Evans.

Noah Schnapp has had cameo appearances in a couple of music videos. In 2018, he appeared in the music video of the song, In My Feelings, by fellow Canadian artist, Drake. He honored artistes Panic! At The Disco and Johnny Orlando by appearing in their videos in 2016 and 2020 respectively.

At the MTV Movie & TV awards in 2018, he won the Best Fright Performance award. He and his co-stars of the series, Stranger Things, went home with the Outstanding Performance By An Ensemble Cast award in 2018.

They received the honor from the Screen Actors Guild Awards. In 2019, he was nominated for and won the Choice Summer TV Actor Award organized by Teens Choice Awards.

The movie star, Noah Schnapp is a big figure on social media where he connects with most of his fans. He has over 19.5m followers on Instagram and is also an active TikTok User.

Noah Schnapp is proud of his Jewish heritage. It is the reason why he decided to take the Bar Mitzvah in Israel in the first place. He lives with his parents in New York City. He and his twin sister, Chloe are very close.

When he isn’t on set, he spends time with his family. The Schnapp owns a husky named Riley. They bought the dog in April 2020. In 2018, he appeared on the cover of Disorder Magazine. He loves to travel and has gone visiting places like France, Colorado, Bermuda, and Switzerland.

In 2019, he suffered a great loss when his grandmother died after a brief illness. He adored her so much. Which was why her death hurt him a lot. Earlier that year, he had modeled for thriving fashion brand, Lacoste, for their sportswear collection.

Despite a large number of female fans, especially teenagers, yearning for Noah Schnapp’s love, he has chosen to remain single in the meantime. Instead, he’s more focused on growing his career. He isn’t dating anybody, no hidden girlfriend, wife, or spouse to be has been put out to the public.

Noah Schnapp‘s acting career has earned him a good revenue over the years, as he’s paid handsomely for his movie or TV roles. His current net worth is estimated to be $350,000-$700,000.