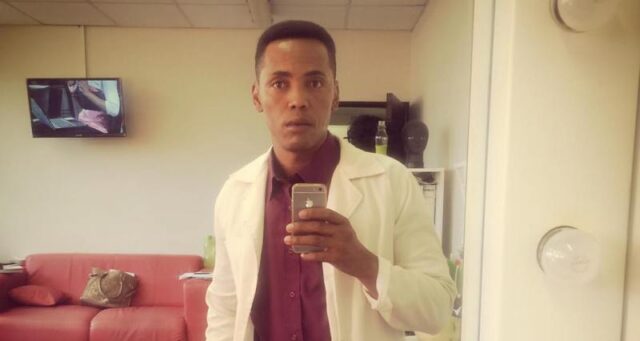 Phoenix Baaitse (born 22 January 1976) is a prolific and salient actor and television personality.

Phoenix Baaitse famed tripled after making a debut role in the SABC1 serial opera, Generations as Tumisho Banzi. Let’s take a sneak preview into the life of Phoenix Baaitse.

Phoenix Baaitse was born on the 22nd of January 1976 in Johannesburg, South Africa.

Despite being a celebrity with notable appearances in blockbuster South African movies, not much is known about Phoenix Baaitse‘s youthful days. He prefers not to talk about his past life in public for personal reasons.

Phoenix Baaitse attended the University of the Witwatersrand in 1995 to study cinema, make-up, directing movies, and acting, but left after a year to attend the AAA School of Advertising.

Phoenix Baaitse made his first television debut in 1994, anchoring eight episodes of Teleschool Geography, an SABC1 instructional show, although he didn’t make a full-time acting career until 2012.

He also featured in a DStv commercial and has subsequently starred in commercials for Samsung AFCON, the Tshwane Golf Tournament, Corenza C, NYDA, Encounters Film Festival, KFC, and Edgars, among others.

In 2013, he starred in Generations as Tumisho Banzi and the SABC2 comedy Majakathata Records, the SABC1 docu-drama series, Ngempela, the SABC2 sitcom, Ga Re Dumele, and the e.tv soapie, Scandal!

Long Way Back Home and Hlupego are two movies in which Phoenix Baaitse has appeared.

Phoenix Baaitse has been in a controversy with some furious upcoming thespians that called him out publicly for not paying them duly after Phoenix Baaitse recruited them for a movie project.

According to the victims, Phoenix Baaitse, who starred as doctor Moremi on the famous SABC1 soapie, cast them in various parts in Ngempela. The accusers claim they were promised payment soon after the filming, but they did not receive their supposed payment.

Mimi Qatsi, an aspiring actress and model who participated in one of the episodes of Ngempela, claimed she was introduced to Phoenix Baaitse by a friend, and she eventually got recruited for the program after sending Phoenix Baaitse her photos via email.

The lady also revealed that they both agreed that a certain amount of fee would be paid to her after she completed the job given to her, and I haven’t been paid. She further stated that she contacted him, but he didn’t respond to her text messages or at least answered his phone calls. “the lady also said all effort made to reach Phoenix Baaitse proved abortive.

The young lady went ahead to say, “Phoenix informed us we’d be paid in 15 days, and we signed paperwork proving our presence after the filming.” We called him after 15 days and received no response to date. I have given up on trying to reach him. Only God knows what’s going on, the lady narrated.

Phoenix Baaitse hasn’t revealed anything about his girlfriend, wife or marriage life to the media.

At this time, Phoenix Baaitse has an estimated net worth of US$120,000. He built most of his wealth and fortune from the entertainment industry and other business chains.