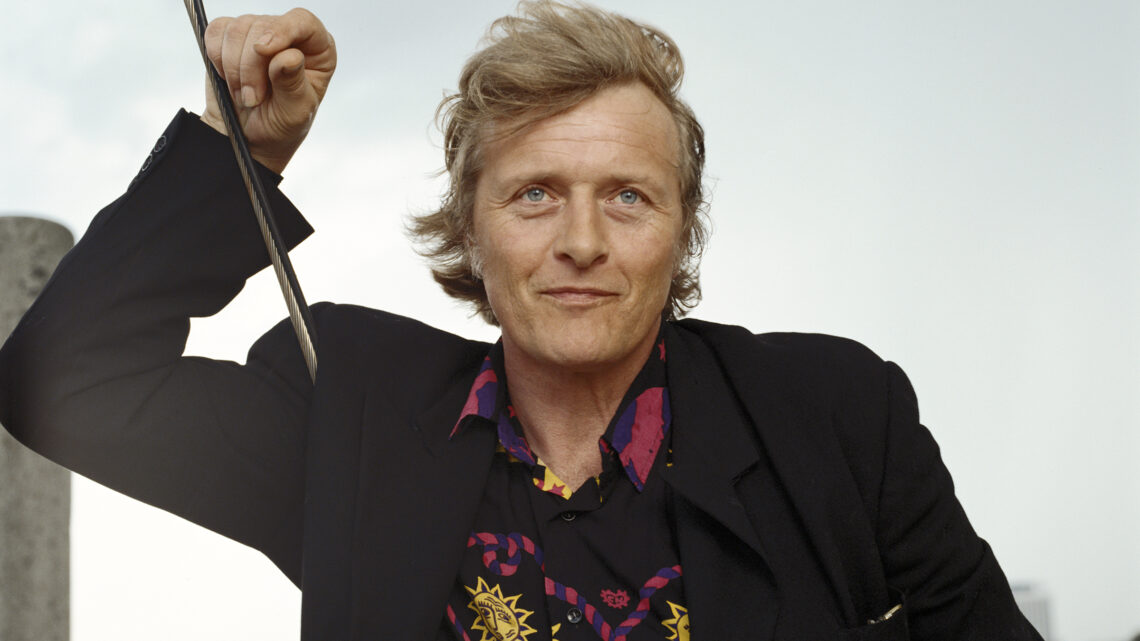 In 1999, he was honored by Dutch movie enthusiasts as the Best Dutch Actor of the Century.

He conquered the world with appearances in films such as Soldier of Orange, in 1977 and Spetters, in 1980.

He moved to a ‘bigger challenge,’ stepping into American films such as Nighthawks in 1981 and Blade Runner in 1982.

Until his death, the iconic Dutch actor Rutger Hauer was a recipient of numerous awards and accolades and is considered by many as an all-time great.

Rutger Oelsen Hauer was born in far Breukelen, in the district of Utrecht, Netherlands on 23 January 1944.

This was when the Netherlands was under German authorities during World War II.

He was a son to Teunke Hauer and Arend Hauer, both of who were actors and principals of an acting school in nearby Amsterdam.

He was the only son with three sisters. According to Rutger Hauer, his parents were more focused on their art than their children; hence he did not have a close relationship with his father.

However, the renowned writer Erik Hazelhoff Roelfzema later played the role of a father figure in his life. This was after they met during the filming of Soldier of Orange.

At the age of 15, Rutger Hauer abandoned schooling to join the Dutch merchant navy. He spent almost a year scouring the world, mostly at sea aboard a freighter.

However, his aim to become a captain was cut short due to his colorblindness. Thus he Returned home, where he worked odd jobs to survive.

Rutger Hauer attended the prestigious Rudolf Steiner school, though he was enrolled in the school by his parents with a significant aim to harness his acting and creativity skills. However, he dropped out when he was fifteen years old to join the Navy.

After a year off school, he enrolled at the Academy for Theater and Dance in Amsterdam for acting classes but dropped out again to join the Royal Netherlands Army.

However, after another unsuccessful stint at the Army, he returned to acting school and graduated in 1967.

Rutger Hauer had his first acting role at the age of 11, with the character of Eurysakes in a play called Ajax. However, he made his screen debut in 1969 when he was cast by Paul Verhoeven in the lead role of a Dutch medieval action drama television series titled Floris. The role brought fame to him in his native country, and he reprised the role in a 1975 German remake Floris von Rosemund.

Rutger Hauer‘s career changed course when he was cast by Paul Verhoeven in Turkish Delight, in1973. The film received an Oscar nomination for best foreign-language film.

The film also found favor in box office abroad and at home and allowed him to appear in more international films.
And within two years, Rutger Hauer made his anticipated English-language debut in a British film titled The Wilby Conspiracy in 1975.

However, Rutger Hauer‘s supporting role was barely recognized in Hollywood; hence he returned to Dutch films for several years.

During those periods, he appeared in Katie Tippel in 1975 and appeared again in Paul Verhoeven‘s Soldier of Orange in 1977 and Spetters in 1980. He acted in both films with fellow veteran Dutch actor Jeroen Krabbé. And at the 1981 Netherlands Film Festival, Rutger Hauer clinched the Golden Calf for Best Actor for his overall body of work.

Furthermore, he got a chance that gave him his American debut, starring in a Sylvester Stallone film titled Nighthawks in 1981 as Wulfgar.

Unafraid of controversial roles, Rutger Hauer portrayed Albert Speer in a 1982 American Broadcasting Company production titled Inside the Third Reich. That same year, he appeared in arguably his most prominent and famously acclaimed role as an eccentric and violent but sympathetic villain named Roy Batty in Ridley Scott‘s 1982 science fiction thriller titled Blade Runner, where he unforgettably delivered the famous tears in rain monologue.

He went on to play an adventurer courting called Theresa Russell in Eureka in 1983, the investigative reporter alongside John Hurt on The Osterman Weekend in 1983, the hardened Landsknecht mercenary Martin on Flesh & Blood in 1985, and the knight opposite Michelle Pfeiffer in Ladyhawke in 1985.

He also appeared in The Hitcher in 1986, in which he portrayed a mysterious but wicked hitchhiker tormenting a lone motorist and killing anyone in his way.

Additionally, he received the 1987 Golden Globe Award for Best Supporting Actor for his role in Escape from Sobibor’s television film. At the peak of Rutger Hauer‘s fame, he was about to be cast as RoboCop in 1987, but the film’s director, Paul Verhoeven, considered his frame as too large to move comfortably in the character’s suit.

However, in 1987, he starred as Nick Randall in Wanted: Dead or Alive, as a descendant of a character played by the renowned Steve McQueen in a television series of the same name. Likewise, in 1988, he appeared as a homeless man in Ermanno Olmi‘s film titled The Legend of the Holy Drinker.

For his excellent performance, he won the Best Actor award at the 1989 Seattle International Film Festival.
Furthermore, Rutger Hauer was selected to play a blind martial artist superhero in Phillip Noyce‘s action film titled Blind Fury in 1989. He made a sensational return to science fiction in 1989 with a film titled The Blood of Heroes, where he played a gladiator in a post-apocalyptic world.

From 2013 to 2014, Rutger Hauer featured as Niall Brigant in HBO’s True Blood, and in 2015, he appeared as Ravn in a film titled The Last Kingdom and Galavant, as Kingsley. In early 2016, he was featured in the film jury for ShortCutz Amsterdam, which is an annual film festival promoting short films hosted in Amsterdam.

Rutger Hauer voiced the role of Daniel Lazarski in a 2017 video game called Observer, set in post-apocalyptic Poland.
He also provided the voice of Master Xehanort in a 2019 video game called Kingdom Hearts III as a replacement for the late Leonard Nimoy and was subsequently replaced by Christopher Lloyd following his death.

Rutger Hauer was 6 feet 1 inch (184.4 cm) tall and weighed 93 kg (205 Ibs). His hair was light brown, and his eyes blue.
About his marriage life, Rutger was married twice. He had his first and only child in a marriage with his first wife, named Heidi Merz. He called the girl-child Aysha Hauer, who was born in 1966.

She turned out to be an actress who gave birth to his grandson in 1987. Rutger Hauer had been together with his second wife, Ineke ten Cate, since 1968, but they got married in a private ceremony on 22 November 1985.

Rutger Hauer was an environmentalist. He fully supported the Sea Shepherd Conservation Society in all ramifications and was even a vibrant member of its board of advisors.

He also formed an AIDS awareness organization known as the Rutger Hauer Starfish Association.
In April 2007, he published his much-anticipated autobiography, titled All Those Moments: Stories of Heroes, Villains, Replicants, and Blade Runners (co-written with Patrick Quinlan), where he discussed many of his acting roles.
And proceeds made from the book went to the Rutger Hauer Starfish Association.

Rutger Hauer died in the spring of 19 July 2019 at his home in Beetsterzwaag, following a brief illness at age 75, and a private funeral service was held on 24 July 2019.

On 23 January 2020, which would have been his 76th birthday, a ceremony graced by many was held in Beetsterzwaag in his honor.

Rutger Hauer is one of the most capped actors of all time. His appearances in movies and influence made him one of the most sort after and highest paid, hence fetching him an estimated $16 million as net worth.

The dead actor left enough behind for his family and would be remembered as a hardworking person.

Although dead, Rutger Hauer would be remembered for the legacy he left behind as a well-recognized actor. His fame spread throughout the world, and his role in movies is still appreciated to date.

He has appeared in numerous films and television series dating back to 1969. Ruger Hauer‘s selected filmography is highlighted below