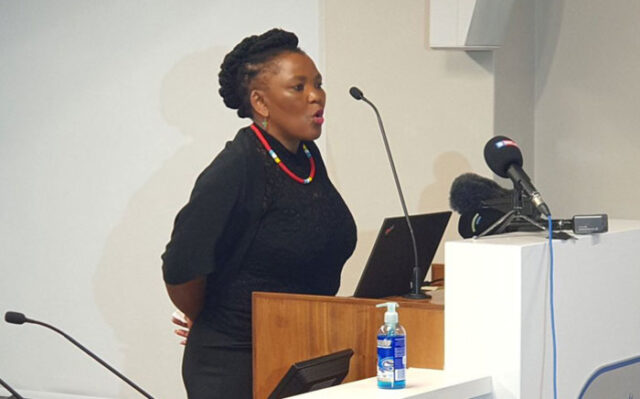 Nomafrench Mbombo is an outright South African politician born on the 6th of September, 1966.

She was born in Mdantsane, East London, South Africa.

She is also academia who was at the level of Associate Professor before she got into politics.

As a Politician, Nomafrench Mbombo has served in several notable positions, including being a member of the Western Cape Provincial Parliament and serving as the Western Cape provincial Minister of Health since 2015.

Nomafrench Mbombo was born on the 6th day in the month of September 1966.

She was born in Mdanysane, East London, in South Africa.

Unfortunately, the details of how she lived her early life and family are not available at the moment.

Nomafrench Mbombo, after her high school education, got admission into the University of Fort Hare, where she obtained a bachelor’s degree in Nursing Science.

Immediately after her first degree, she went to the University of KwaZulu Natal, where she had a master’s degree in maternal and child health.

Finally, she continued her educational pursuit at the University of Western Cape, obtaining her Ph.D. in Gender and Human Rights.

Nomafrench Mbombo was in academia before she developed an interest in moving into politics. She was a lecturer at the Faculty of Community and Health Sciences at Western Cape University. She was at this period an associate professor, which is close to the peak of her profession.

Nomafrench Mbombo started her political career in African National Congress (ANC) before changing to the Democratic Alliance (DA) in 2013. This happened after she attended a DA meeting for black professionals.

As an active and influential member of the Democratic Alliance, Nomafrench Mbombo was elected to the Western Cape Provincial Parliament in the 8 May 2014 election. After this successful election, she was sworn in as a Member on the 21st of May 2014. She represents the Philippi region of the City of Cape Town.

Also, in the same year, 2014, Premier Helen Zille appointed Nomafrench Mbombo to the post of Western Cape Provincial Minister of Cultural Affairs and Sport, and she was sworn in on the 26th of May 2014.

In 2018, Denise Robinson, who was the incumbent Federal leader of Democratic Alliance Women’s Network, publicly declared her loss of interest in being re-elected for another term. This made Nomafrench Mbombo show her interest in the position. She contested, and she was elected at the party’s Federal Congress on 7 April 2018.

In May 2019, Alan Winde became the newly elected Premier. However, immediately as Alan Winde emerged as the Premier, he announced that he had retained Nomafrench Mbombo in her post as Provincial Minister of Health.

In October 2019, due to Athol Trollip’s resignation, Nomafrench Mbombo announced her interest in being the next Interim Federal Chairperson. But, unfortunately, she had a very tough contestant at this period, which made her lose to Ivan Meyer.

In December 2020, at the peak of the COVID-19 outbreak, Nomafrench Mbombo stormed social media with pictures of her holiday to Limpopo, where everyone is supposed to be isolated according to government regulation. She was greatly criticized for this behavior even though she justified her action by saying she was long due for such a treat.

On 28 April 2021, Nomafrench Mbombo resigned as the Federal Leader of the Democratic Alliance’s Women’s Network. This decision was made after Boginkosi Madikizela had resigned as DA provincial leader and the Provincial Minister of Transport and Public Works.

Nomafrench Mbombo is a busy and disciplined woman who spends most of her time chasing her goals. Therefore, she does not operate any social media account.

Nomafrench Mbombo got married, and she has two daughters in the marriage. Unfortunately, she lost her husband in 2003, leaving her with her daughters.

In March 2020, Nomafrench Mbombo contacted the French consul-general Laurent, who tested positive for COVID 19. She consequently went into isolation and later tested negative.

Nomafrench Mbombo is a very buoyant and prosperous politician in the history of South Africa.

She has as well held several positions over the years. Nomafrench Mbombo is estimated to be having a net worth between $900,000 to $1.2 Million.