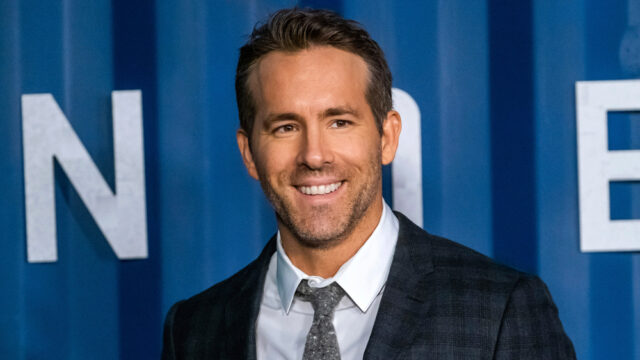 Ryan Rodney Reynolds (born October 23, 1976) is a Canadian actor who starred in both television projects as well as major Hollywood productions. His first role came when he was just 13 years old, although he is perhaps best known for his roles in Deadpool (2016) and National Lampoon’s Van Wilder (2002).

Ryan Reynolds’ success in professional and personal endeavors has only continued from there, and today he is a respected Hollywood icon with a thriving family of five.

Born in Vancouver, Ryan Reynolds was the youngest of four children. He was reportedly a particularly nervous and sensitive child with an acute sense of awareness of the world around him.

This vulnerability proved to be a boon in school productions, and Ryan Reynolds quickly became a professional actor. His first role was as a cast member of Hillside (also known as Fifteen in the US), a teen drama that ran from 1991 to 1993.

Ryan Reynolds’ next significant acting role was on CBC’s The Odyssey in 1993 and 1994, and he graduated from Kitsilano Secondary School in 1994. He performed with improv group Yellow Snow after graduation while appearing in TV series such as The X-Files (1996), The Outer Limits (1995), and Lonesome Dove: The Outlaw Years (1995).

Ryan Reynolds supported himself by working as a grocery store clerk at night during this time and ultimately dropped out of Kwantlen Polytechnic University just a few months after he started his studies in order to move to Los Angeles when he was 19.

After moving to Los Angeles in 1995, Ryan Reynolds was cast as series regular Xander in Buffy the Vampire Slayer but turned it down because he wanted to act in something taking place outside of a high-school setting. ABC ultimately offered him the first job he accepted while in California with their sitcom Two Guys, a Girl, and a Pizza Place. The show ran from 1998 to 2001 and allowed Ryan Reynolds to develop his comedic abilities, including the kind of bumbling mimicry that would help make National Lampoon’s Van Wilder a cult hit in 2002.

Ryan Reynolds’ career began to take off after his National Lampoon appearance, taking part in Foolproof (2003), a Canadian heist film, as well as playing a supporting role in The In-Laws, a Hollywood flick starring Albert Brooks and Michael Douglas. His next big-time movie was Blade: Trinity (2004), and this time he played a starring role opposite Wesley Snipes.

After his Blade appearance, Ryan Reynolds had his pick of acting opportunities. He scored back-to-back starring roles in the comedies Just Friends (2005), Waiting (2005), Adventureland (2009), as well as The Change-Up (2011). He also starred in romantic comedies, including Definitely, Maybe (2008), a box-office hit also starring Rachel Weisz, and The Proposal (2009), which saw him work opposite Sandra Bullock.

Action films are another area where Ryan Reynolds shines. In 2006, he starred in Smokin’ Aces, and in 2009 saw the release of X-Men Origins: Wolverine. The latter received mixed reviews but was a box office success financially. He then took part in Green Lantern in 2011, which was not as well-received as Wolverine.

Ryan Reynolds would move away from DC movies with R.I.P.D. (2013) and Deadpool (2016), the latter of which was a blockbuster hit that received both critical and financial success. The title was one of the highest-grossing films of the year, earning US$782, a tidy profit over the film’s budget of $58m. Deadpool was also the highest-gross R-rated film and X-Men film at the time. Ryan Reynolds co-starred in the movie with T.J. Miller, Brianna Hildebrand, Ed Skrein, Morena Baccarin, and Gina Carano.

In 2018, Deadpool 2 was released. The movie was co-written by Ryan Reynolds, who also starred in the film along with Josh Brolin, Jack Kesy, Julian Dennison, and many of the actors from the first movie. The film was another success, bringing in US$785m against a budget of US$110m. Another Deadpool entry is purportedly in the works, but few details have emerged.

Ryan Reynolds also dipped his toes into action-based comedies, with The Hitman’s Bodyguard (2017) opposite Samuel L. Jackson and The Hitman’s Wife’s Bodyguard (2021). He also worked on 2021’s Red Notice. Thrillers are another of his successful endeavors, including Buried (2010), Safe House (2012), and 6 Underground (2019). He also took part in a series of more serious titles such as The Nines (2007), Chaos Theory (2008), and Woman in Gold (2015), with only the latter receiving much success or praise.

Ryan Reynolds has been involved with a number of fellow celebrities, and his personal life has been nothing short of infamous. He was engaged to Alanis Morrissette in 2004, just two years after his first significant Hollywood role, and the couple ended their relationship in 2007. Romance struck that same year again with Scarlett Johansson, and the two were married soon after in an intimate ceremony in 2008. The marriage would break up just two years later, in December 2010.

In 2017, Ryan Reynolds became a co-owner in gin brand Aviation. In 2019, Ryan Reynolds and Blake Lively welcomed a third daughter, Betty Reynolds, and in 2020, Aviation sold for a reported US$610m.

There has been little news of Ryan Reynolds’ 2021 activities. Whether his next film will be centered on a superhero, a romance, or a casino theme remains to be seen.

While listing every reward Ryan Reynolds has received during his formidable career would make this article unreasonably long, here are some of the highlights:

He is one of the highest earning actors in the planet earth, Ryan Reynolds‘ net worth is valued about US$150 million.