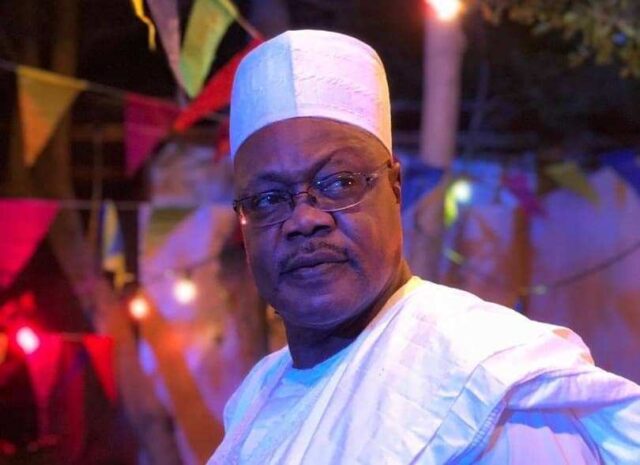 Sani Mu’azu (born May 2, 1960), also known as Sani Mu, is an award-winning actor and movie producer.

He is arguably one of Nigeria’s biggest actors and doubles as a professional movie director and producer. Sani Mu’azu is appreciated for his role in an award-winning movie titled King of Boys, featuring Paul Sambo and Akin Lewis.

Sani Mu’azu has worked on movie projects both in and outside Nigeria. He has received numerous roles in the administration and development of the Nigerian film industry. He also served as President of the Motion Picture Practitioner’s Association of Nigeria.

Sani Mu’azu was born on May 2, 1960, in Jos, Plateau State, Nigeria. He is from the northern part of Nigeria and from an Islamic background.

Sani Mu’azu schooled at the Nigerian Institute of Journalism in Lagos State after graduating from the University of Jos (UNIJOS), where he studied Mass Communication.

Sani Mu’azu has been in the Nigerian movie industry (Nollywood/Kannywood) for over 2 decades. He produced a film in 2007 titled Mountain Blues. Mountain Blues was awarded the Best Feature Film Award at the Abuja International Film Festival (AIFF) in 2019.

The movie also earns him the Filmmaker of the Year award and the Plateau Man of the year Award. He worked on a movie titled Soweto, directed by Mike Reburn.

Aside from being in and behind the camera, Sani Mu’azu is known to occupy administrative roles in the industry. He served as the president of the Motion Picture Practitioners’ Association of Nigeria.

Sani Mu’azu has written, produced, directed and acted in several projects in and outside the shores of Nigeria, including Shadows, Behind the Clouds, Riddles and Hopes (Winning best Actor in Nigeria Award), Agumba, Amina, Eg’igwe, Tambaree and several others.

A feature film he produced in 2007, titled Mountain Blues, won best feature film at the Abuja International Film Festival. Hafsah is another feature film on HIV/AIDS advocacy he produced for BBC World Service Trust Abuja and won 3 AMAA nominations, making it the only Hausa Film to achieve such a feat in Nigeria.

Furthermore, he received the best Hausa Producer/Director at the Africa Film Awards in the UK. As an actor, he played lead roles such as Baba Nasiru in Riddles and Hopes and Mr. Solomon in Shuga Naija.

He is a recipient of the prestigious Stars in the Movies Award and the Nollywood Personality Award NOPA. He was appointed in 2017 as a Fellow of the Film Academy, FFA, by the Igbinedion University, Okada.

Sani Mu’azu was also among the Communication for Change Experts consulting for UNICEF, D Field Office, Bauchi in 2009. He is the immediate past National President of the Motion Picture Practitioners’ Association of Nigeria.

Sani Mu’azu is also a pioneer member of the steering committee for the Motion Picture Council of Nigeria by the Federal Government. Presently, he is a member Directors Guild of Nigeria, DGN.

He is also a member Independent Producers Association of Nigeria ITPAN. He is currently the MD/CEO of Lenscope Media based in Jos.

Veteran movie star Sani Mu’azu is very much available on various social media platforms such as Facebook with over 2522 likes and Instagram with over 312k followers.

Sani Mu’azu is married and has 3 children who were all born in June; this includes two sons: Farouk Mu’azu, 24, Imran Mu’azu, 22, and a daughter named A’isha Yasmin Mu’azu,19.

His first son, Farouk Muazu, and his first daughter, A’isha Yasmin Mu’azu, were born on the same date, the 21st of June. On the other hand, Imran Muazu was born on the 7th of June.

Sani Mu’azu is a legendary but influential actor in the movie industry with enviable achievements and awards.