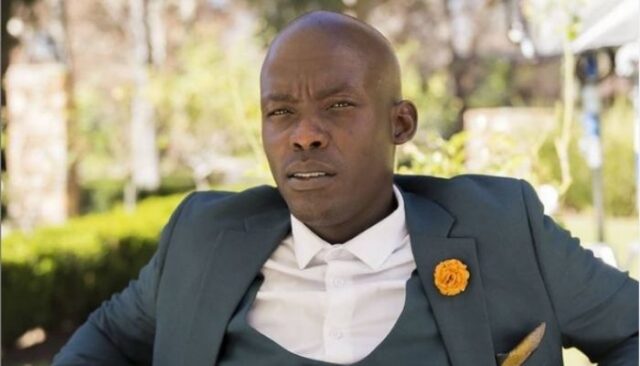 He rose to the limelight after he played the role of Khabzela in the South African award-winning television series titled The River.

He has also made debuts in both local and international films and television series.

Thapelo Sebogodi has made a name for himself by anchoring and starring in different TV shows and theatrical programs.

He became a global figure after making a debut in ‘Strike Back’ and other international movies.

Let’s find out more about this charming young man.

Thapelo Sebogodi was born in 1988 which makes him a 34 years old man.

Because of his father’s reputation, he had a tough time socializing among his peers, especially after his father became famous after featuring as a lead actor in a popular comedy show.

He revealed that, when he was just nine years old, a woman approached his father to embrace him and pushed him out of the way. “he said the incident still frightens him because it was so intrusive,” According to his father reaction towards the incident, he said, “Not everyone is considerate of your private space.”

Thapelo Sebogodi never wanted to follow in his father’s footsteps of becoming an actor, even though he always followed his father to sets.

He said “he always go with my father to the set after school, or wait for him at the theatre. Thapelo Sebogodi explains. “Every school vacation I spent on a movie set or in a theater.” “I had no desire to be there.”

Over the years, he said he had no idea how his father’s fame and ethics had cleared the path for him to become a professional and successful actor. “I was fostered without my knowledge or consent,” he laughed.

Following his graduation from high school, Thapelo Sebogodi studied drama at the Tshwane University of Technology.

His father had hoped that his son would become a pilot. However, he supported Thapelo Sebogodi when he decided to ditch the pilot for theater act. “His matriculation results were also exceptional.”

Thapelo Sebogodi made his first official television debut in 2012 on the SABC1’s reality show titled ‘Life’s a Stage,’ followed by subsequent roles in ‘Greed & Desire’ and Donkerland, an Afrikaans miniseries.

Thapelo Sebogodi claims he used his father’s name as a warrantor in interviews and auditions.

Thapelo Sebogodi revealed that he used to have a nasty temper as a youngster. If I got into a fight with my peers, my dad would have me play chess for hours. If I make a single wrong move, and he would add 20 more minutes to my punishment.

There was a method to my dad’s strictness. According to him, “he wanted to show his father that whatever he did had an effect.”

Thapelo Sebogodi also described how his father maintains an open connection with all of his children and that no subject is off-limits, including his personal life.

Thapelo Sebogodi also revealed that his father will sit down with his children to talk about his scandalous marriage proposal to a lady named Makoena Francina Kganakga after the lady uploaded a photo of his father on his knees with a diamond ring in his hand.

Makoena Francina Kganakga has no wife or girlfriend published on the media space. Everyone believes he keeps this private for a reason best known to him.

It is believed that the thespian Thapelo Sebogodi is estimated to be wagging around with a net worth of US$700,000. This is due to his debuts in international movies.