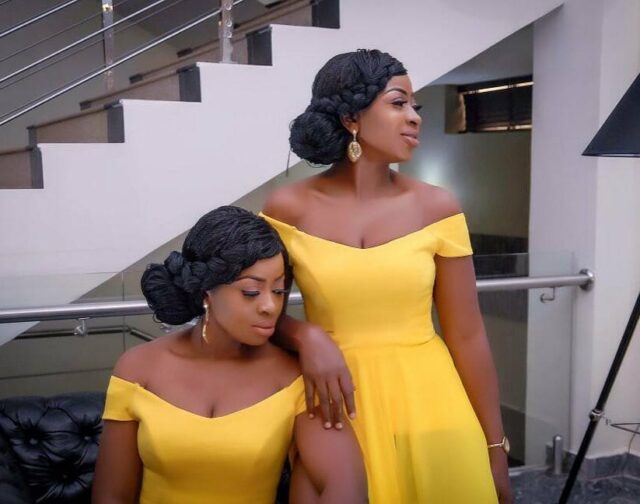 The Aneke Twins (born 6 August 1986), consist of two beautiful sisters, Chidimma and Chidebere Aneke, who gain popularity in acting as actresses and movie producers in the Nollywood industry.

They burst into the Nigerian movie industry in 1999 and got their first role in the movie titled, Ebuka, a movie that attracted many movie directors.

The movie, Desperate Twins, shot The Aneke Twins into the limelight.

Ever since, they have starred in more than 80 Nollywood movies, some of them which include; Lagos Girls, Broken Ambition, Jealous Friends, Adaora, and so on.

Chidinma and Chidiebere Aneke, popularly known as the Aneke Twins, were born August 24, 1986, in Enugu State.

They were born to a wealthy family but were short-lived after the death of their father.

The girls had to hawk on the streets of Enugu to help support their mother and derive income for the family’s survival.

The Aneke Twins shared in an interview that their father’s death made their family devastated and unable to cope.

The twins also have an elder sister whose name is Favour Aneke.

Favour Aneke is not an actress, and we do not quite know what she does. The sisters don’t talk about Favour, except someone invited them to one of their first shots because of her.

Education at their early stage of life came to an abrupt end after their father’s death. Thus The Aneke Twins had to abandon schooling for their inability to pay their fees.

However, they returned to school shortly after their first movie was released and later staged a comeback to acting in 2003.

The girls, The Aneke Twins successfully made a breakthrough in their very first film in 1999. However, according to the Aneke sisters’ words, they, with the significant influence of their mother, were forced to take a break from filming to finish studying in school. As soon as they were done with school, the sisters went back to acting in 2003.

Since then, they have not slowed down. While doing what Aneke twins know how to do best, producers have created characters and cast them for similar roles that brought out the stuff they were made of in most cases.

The Aneke Twins has numerous women’s awards. At the top is the Humanitarian award, and they got a nomination for the Most Promising Acts to Watch at the Africa Magic Viewers’ Choice Award.

Aside from having a passion for filming, the Aneke twins are very active on Instagram; you can follow and view most of their beautiful pictures @Anaeketwins.

Most surprising is that the Aneke Twins are not married. During an interview with Sun News, they explained that a failed courtship is better than a failed marriage in their eyes.

Chidiebere Aneke stated; “Marriage is sacred! So, I should break courtship than Marriage. Our mother didn’t divorce her husband until we lost our father. So, we want to emulate her good virtues of living a peaceful and lovable life with our husbands.

“Honestly, we need to understand the purpose of Marriage which includes love, friendship, patience, trust, and tolerance. Unfortunately, some marriages break because the couples don’t see their partners as friends and soul mates.”

The Aneke Twins, however, hope to get married to the right men someday.

Ever since the Aneke Twins‘ first movie in 1999, the movie stars has starred in over 80 Nollywood movies, some of which includes :

The Aneke twins have an estimated net worth of $700,000 with their income put together.

Their wealth is accumulated and acquired through acting and producing films.