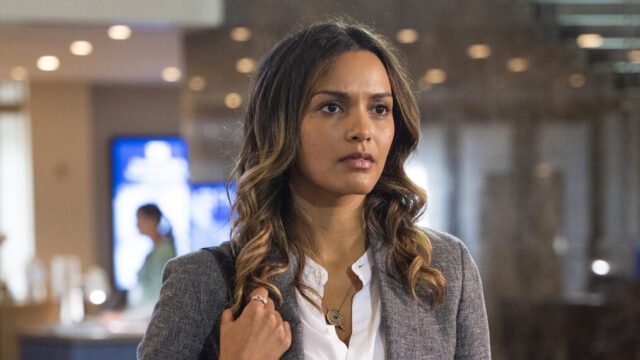 She is well-known for her work in the 2013 Evil Dead, The Covenant, and Cloverfield films, as well as for her television appearances in Gotham, Edgemont, Melrose Place, and Cult.

Jessica Lucas also appears in the music video for the Coldplay song True Love from 2014.

Jessica Lucas was raised in Vancouver, British Columbia, Canada, where she was born. She was born on the 24th of September in 1985. Her mother is a European Canadian, while her father is a Black Canadian.

At the age of seven, she started performing and received training at the Children’s Arts Theatre School in Toronto.

Jessica Lucas began her acting career by participating in regional productions of shows including Snow White and the Seven Dwarfs, Grease, Cinderella, Mousetrap, and Music Medley.

In April 2017, Jessica Lucas announced her engagement to chef Alex Jermasek. The couple married on June 9, 2018, in an intimate ceremony at the Jessica Lucas family ranch in Santa Ynez, California.

Guests included Jessica Lucas‘ sister Michele Lucas, who served as maid of honor, and her brother-in-law John Jermasek, who was the best man.

The bride wore a custom gown by designer Monique Lhuillier, and the couple exchanged vows in front of a small group of family and friends. Alex Jermasek is known mostly for his association with Jessica Lucas, but he’s also a butcher, chef, and general food enthusiast.

Jessica Lucas debuted on the Canadian adolescent drama television series Edgemont in 2001 as a recurring character Bekka Lawrence. She then joined the cast as a regular series until the show’s cancellation in 2005. She also had a recurring role in the 2002 season of 2030 CE, a short-lived Canadian television program on YTV.

She guest-starred in an episode of The L Word as Roxanne in 2004. Jessica Lucas went on to appear as a series regular in the short-lived ABC teen drama series Life as We Know It as Sue; the series which ran for just one season. In 2006, she appeared in the film, She’s the Man and co-starred in The Covenant. She was cast in another ABC television pilot, Secrets of a Small Town, though it was not picked up into a series.

Jessica Lucas joined the cast of CSI: Crime Scene Investigation in 2007 and played the recurring role of Ronnie Lake. She appeared in four episodes, but rumors that she would permanently take Sara Sidle‘s position were refuted. Without any justification, the series’ writers eliminated the character. She also had an appearance in the television movie Split Decision.

Jessica Lucas appeared as Kimberly MacIntyre in four guest appearances on The CW’s 90210 in 2008. She also played the lead character of Lily in the critically acclaimed and financially successful film Cloverfield by J. J. Abrams.

She was chosen to play Lisa in the 2006 movie Amusement, which was originally going to be distributed in theaters by New Line Cinema but was instead released straight to DVD in 2009. The same year, it was revealed that Jessica Lucas had signed on to play Riley Richmond, one of the lead parts in Melrose Place, a follow-up to the wildly successful 1990s series of the same name, which is airing on the CW.

According to sources, Jessica Lucas‘ net worth is estimated at US$4.5 million. She made her wealth from the entertainment industry as an actress.