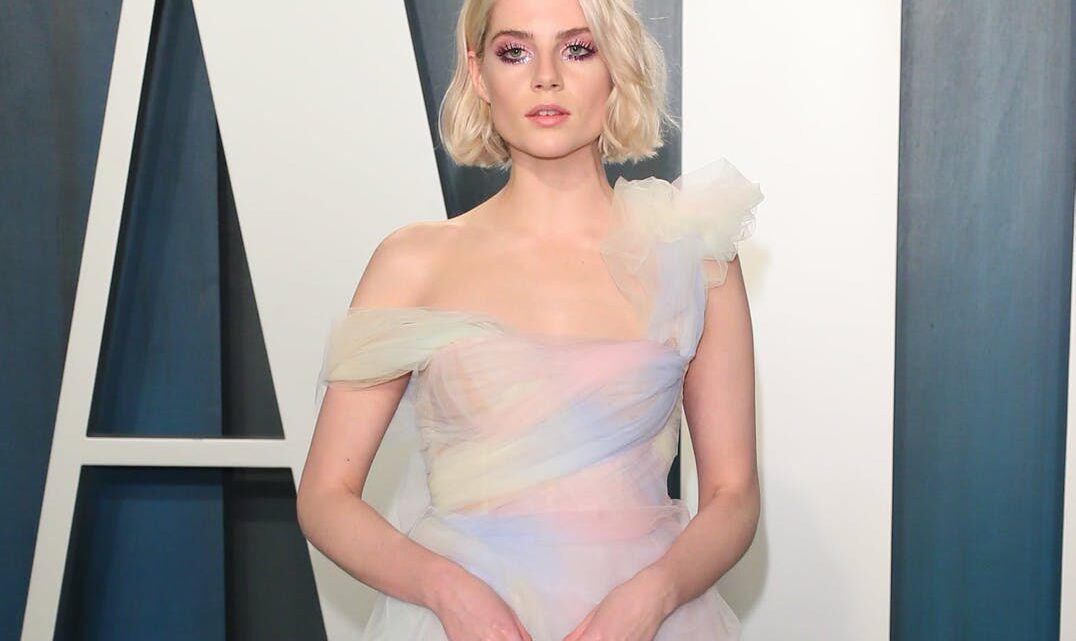 She caught the eyes of movie-enthusiasts and deservedly became famous for her roles in films such as Miss Potter, Apostle, Sing Street, Murder on the Orient Express, and Bohemian Rhapsody.

The English actress has been part of several TV shows, such as Lewis, Sense, and Sensibility, earning a Young Artist Award nomination for her debut role in Miss Potter.

She, however, spent the majority of her childhood in London.

Her elder sister, Emma Louise Boynton, is a broadcast journalist.

Lucy Boynton made her film debut at the young age of 12. She was scouted by a casting director at one of her drama classes. Then the casting director contacted her and invited Lucy Boynton for an audition. She auditioned for the character of young Beatrix, the lead character in a 2006 biographical family drama titled Miss Potter.

After several auditions and workshops, she finally got the role and marked the beginning of her acting career.
The character helped her clinch her first Young Artist Award nomination for the Best Performance in a Feature Film – Supporting Young Actress.

In 2007, she portrayed Posy Fossil, a ballerina and one of the three lead characters in a BBC film titled Ballet Shoes.
The following year, Lucy Boynton played the role of Margaret Dashwood in a BBC serial titled Sense and Sensibility.

In 2010, Lucy Boynton was seen as Henrietta Norton in a TV movie titled Mo, and the following year, she played a guest role in a British TV detective drama titled Lewis, in what would be her first female lead in any TV series.

Then Lucy Boynton was cast as Esther Hagadorn in a 2013 Canadian–American film titled Copperhead. Afterwards, she characterized a mysterious model named Raphina in a 2016 comedy-drama film titled Sing Street. Finally, in 2017, she portrayed Countess Helena Andrenyi in a film adaptation of Agatha Christie‘s book titled Murder on the Orient Express.

Additionally, she starred in 2018 British–American period horror film titled Apostle, where she played the role of Andrea. She then appeared in Bohemian Rhapsody as Mary Austin, Freddie’s girlfriend. It was released in 2018.
The film gave the entire cast, including her, a Screen Actors Guild Award nomination for Outstanding Performance by a Cast in a Motion Picture.

She had a supporting role as Charlotte, a Harrods shopkeeper, in Locked Down in 2021, which was on HBO Max.

Lucy Boynton has garnered quite an impressive number of followers on social media, with her Instagram boasting over 952k followers and her Twitter over 27.3k followers.

She fully supports the Black Lives Matter movement and has shared several educational resources for racial justice on her social media pages.

LLucy Boynton is rumoured to be in a relationship with Bohemian Rhapsody’s co-star Rami Malek, who appeared as Freddie Mercury.

According to several sources, the American actors developed feelings for each other while working on the film.
As soon as the rumours of their affair surfaced, the media was quick to link them together.

Lucy Boynton and Rami Malek attended Bohemian Rhapsody’s premiere in the UK but left the event mid-way to spend some quality time with each other.

According to sources, they went to a nightclub called LayLow in Notting Hill. They were also captured together at the Miu Miu show at the Paris Fashion Week and at an event in Minneapolis in early February 2018.

Sources have also revealed that Rami Malek often visits Lucy Boynton in London. However, despite being frequently seen together, they have not yet revealed anything about their rumoured relationship.

Lucy Boynton is gradually becoming a mainstay in the American film industry has been active for quite some time now. Lucy Boynton consistency and hard work engineered an estimated $3 million net worth for the English-born American actress.