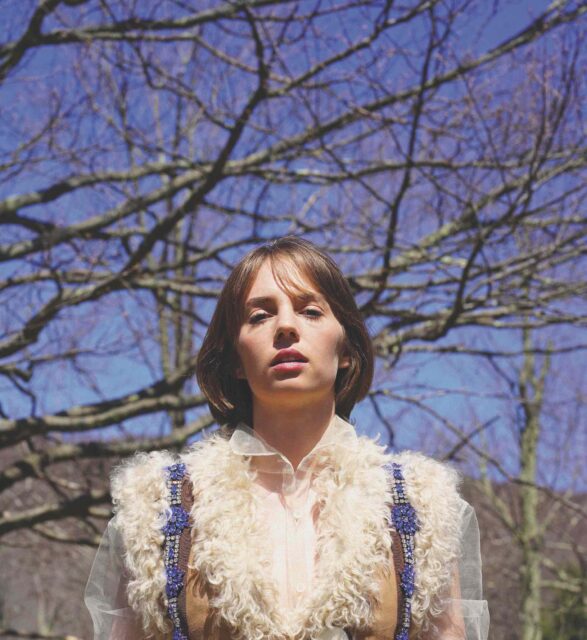 She is also the first child of popular Hollywood stars; Ethan Hawke and Uma Thurman.

In 2017, she hit the limelight after dropping out of Julliard School to feature in Little Women.

She became the face of British fashion retailer AllSaints‘ 2016/2017 collection and co-starred in Stranger Things’ third season in 2019.

Earlier in her life, Maya Hawke suffered from dyslexia and was able to push through due to the support of her parents. She enrolled in special schools with less regard for grades.

Maya Hawke was born to actors Ethan Hawke and Uma Thurman on the 8th of July, 1998. She was raised in the busy city of New York with her brother; Levon Roan Thurman-Hawke who was born in 2002.

Her parents are household names in Hollywood. They both possess very interesting ancestries, with her father being the great-great-grandniece of the popular playwright, Tennessee Williams, while her mum is the granddaughter of Buddhist scholar, Robert A. F. Thurman, and model Baroness Nena von Schlebrügge.

Ethan Hawke and Uma Thurman met during the filming of Gattaca in 1997. They got married the following year but parted ways in 2005. Mr. Hawke got married to Ryan Shawhughes; Maya’s step mum while Uma Thurman linked up with Arpad Busson. Their relationships elsewhere meant Maya Hawke currently has three half-sisters aged nine, ten, and thirteen respectively.

Maya Hawke‘s childhood was marred by dyslexia, which made it difficult for her to meet up school standards. She eventually got the chance to learn her own way, propelling her to become better. Her religion can be linked to Buddhism.

Maya Hawke‘s condition made her struggle to get good grades. After completing the first stage of her education, her parents were supportive and resorted to trying out different schools for her. Eventually, she got enrolled to a private school in Brooklyn, New York known as Saint Ann’s School. There, she was taught how to be creative with less emphasis on grade work.

She also attended the Royal Academy of Dramatic Arts in London and the renowned Stella Adler Studio of Acting in New York.

She spent one year in Julliard School, learning the specialty of Performing Arts before dropping out to feature in ‘Little Women’.

Many critics have opined that Hawke’s performances are still too early to come under scrutiny. However, Maya Hawke’s first three years in the movie industry have proven worthwhile.

She followed the footsteps of a talented dynasty by making her first appearance in 2017’s Little Women, which was a miniseries adaptation by BBC. Her next role came as Robin Buckley in the third season of Netflix’s Stranger Things in 2019.

This time, she was given the chance to co-star, despite breaking onto the scene with little experience. She also played Linda Kasabian in Quentin Tarantino‘s film, Once Upon a Time in Hollywood.

Maya Hawke‘s time at special schools has so far yielded substantial dividends. She decided to try out her vocals prior to 2019’s summer and released her first two singles, To Love a Boy and Stay Open later on.

Her father proved supportive; teaming up with Jesse Harris to record both songs. Maya‘s performance in New York City was her first-ever solo live performance as a music artist. She also went on to release her first single, By Myself before dropping her Bluish album in 2020.

It came as no surprise when Vogue picked Maya Hawke to grace their pages some years back. Her grandmother and mother had gotten similar opportunities in the past.

She was also the face of British fashion retailer AllSaints‘ 2016/2017 collection. That same year, she was selected to join a modeling campaign for Calvin Klein‘s underwear range.

Maya Hawke is currently single but has been in multiple relationships in the past. She once dated Gus Wenner; the President and CEO of Wenner Media and was also with fellow actor, Tom Sturridge for a while.

Her recent shot at love came through with Lucas Zwirner, another actor. However, their intimacy ended after a few months.

Maya Hawke‘s frequent activities suggest she is a lover of music; due to the number of hours she’s spent in the studio recently. She also exudes an appreciable level of creativity in her social space. She has a height of 1.74 m.

Maya Hawke‘s financial power is an accrue of her multi-faceted specialization. She also stems from a wealthy family and holds a personal net worth of $3,000,000.