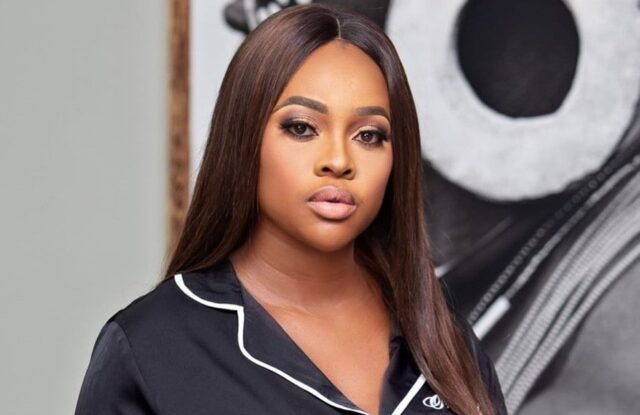 The progressive actress came to the limelight after starring in the popular sitcom, Muvhango, produced by media house SABC2.

She is also a fashion designer and an entrepreneur.

Omuhle Gela was born into the family of Mr and Mrs Gela in the Eastern part of the city of Johannesburg, South Africa.

Omuhle‘s mother gave birth in one of the city’s hospitals on the 19th of November 1991.

She grew up in Johannesburg with people who came from different parts of the country, which sparked in her the interest to go into the entertainment industry.

At first, she contemplated between pursuing a career as an actress or a singer before settling for the former.

She completed her elementary, middle and high school in Johannesburg.

In 2010, she enrolled at AFDA film school to study Live Performance and Production.

From 2011 to 2012, she studied at the City Varsity Film and Television School in Cape Town.

As a child, she was a part of the kid’s show, Kideo.

At the completion of her studies in 2012, she pursued a professional acting career.

In October 2012, she auditioned for a role in the SABC2 Soap Opera, Muvhango and was cast to play the character Busi Motsamia.

Her character was the daughter of James Motsamia and Doobsie Mukwevho, who had returned back from Japan to become an arch schemer in the series.

This role catapulted Omuhle into the limelight as she grew into a household name. The show was over five million viewers.

She has also performed a recurring role in Zabalaza, a Mzansi Magic soap opera.

She has a guest role in the SABC1 soap opera, Generations.

She starred in the Television series, Taxi Ride, produced by David Kau Productions.

In 2015, she was cast in the e.tv series, Umlilo, where she played the role of Andile – the eldest daughter of Mnqobi and Cebisile.

Omuhle Gela has also starred in the famous series, The Queen.

She has also worked as a presenter in the past, working for TransAfrica Radio and Soweto TV.

The beautiful actress is also a DJ and has been invited to perform in several top events across South Africa.

As an entrepreneur, she is the CEO of the fashion line, Twenty Swimwear. The brand produces swimwear for its clients across the world.

Omuhle Gela is very active on social media because it is an avenue by which she connects with thousands of her fans across the world.

She revealed in an interview with Metro FM that she underwent cosmetic surgery so as to augment her breasts.

Though Omuhle Gela is unmarried, she is the mother of a beautiful baby girl. Her baby father is the famous Nsovo Mashaba.

Rumor has it that Omuhle Gela boyfriend, spouse or husband to be is also Nsovo Mashaba.

She is one of the few South African actresses who maintain a luxurious lifestyle. She is known for always travelling to beautiful cities on holiday trips. She also wears expensive outfits.