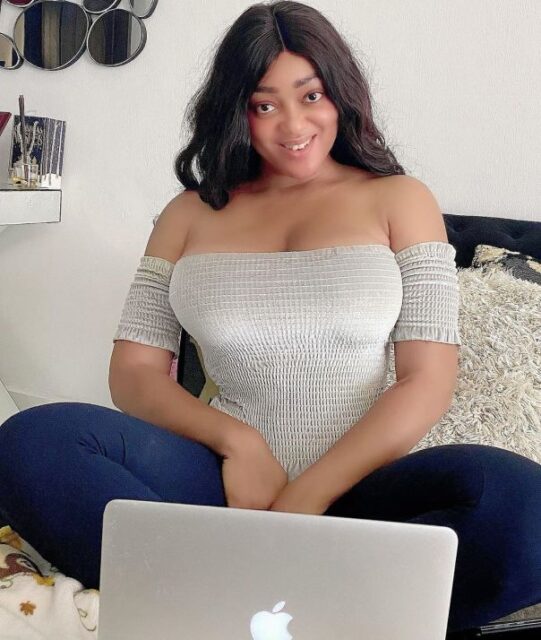 She’s known by many for her role in popular Nigerian TV series titled, Husbands of Lagos.

However, the TV series made her famous in Nigeria and paved the way for her to be known abroad.

She is also an ex-beauty queen that has own several pageants in Nigeria.

Her light and smooth skin made fans of hers nicknamed her Ego Oyibo (Meaning White Money in Ibo language).

Peggy Ovire was born and brought to life on 22 October 1985 in the busy city of Surulere located at the hub of Lagos State, Southwestern Nigeria.

She hails from Ughelli in Delta state South-South Nigeria.

She is a native of the Urhobo tribe of Delta State.

She was born to a family of six as the third child of her parents.

She’s spent most of her life in Lagos State and hasn’t relocated permanently from the commercial city to date.

Peggy Ovire did her primary education in a local school located in Surulere Lagos called Itire Nursery and Primary School.

Furthermore, she attended AUD Secondary School located in Surulere, Lagos State, to get her secondary education, where she was able to secure the mandatory West African Examination Council (WAEC) certificate and her Senior Secondary School Certificate (SSCE).

Peggy Ovire did not just stop there. She gunned for her first degree at Delta State University, located in Abraka Delta state, but could not finish.

However, Peggy Ovire returned to complete her degree acquisition, this time in the prestigious Ambrose Alli University, where she graduated with a Bachelor of Science degree (b.sc) in Banking and Finance.

She needed training on harnessing her acting skills which was why she enrolled at the New York Film Academy located in the city of New York, United States.

Peggy Ovire started her career officially as a model. She modeled for top brands before becoming a full-time actress in 2013 when she acted in a movie produced by the renowned Uche Nancy titled Best Of Enemies.
Before then, she was a beauty queen who won the Most Beautiful Girl On Campus ( DELSU) in 2003 while at the University.

At the big staged, Peggy Ovire emerged as the winner of Miss Tourism Delta State and Miss Galaxy International Nigeria 20O7. She also contested as the Most Beautiful Girl in Nigeria in 2005, where she came third.

Peggy Ovire‘s career as an actress came into the limelight when she acted in the fans’ favorite television series titled Husbands Of Lagos. She’s also acted in Nollywood films such as Playing With Heart, Marry Me Yes or No, Last Engagement, Grey, Fake Marriage, and so on.

Peggy Ovire has grown to become a big name in the industry and even produced her own movie. First was a film titled Emergency, followed sequentially by Ufuoma, Fool Me Once, The Other Woman, The Boy Is Mine, and others. All were Nollywood English films.

She was awarded the Most Promising Actress of the Year (English) at the 2015 City People Entertainment Awards.

Peggy Ovire is also an entrepreneur. She is the owner and founder of a clothing-line boutique known as Hugs Culture located in the commercial city of Lagos. She’s also the CEO of Peggy Ovire‘s world, another fashion enterprise in Lagos.

Peggy Ovire is a beautiful actress and model who connect with her fans on social media quite well.

Her natural eye color is black, but she fixes the contact lens to enhance and hazel her eyes.

Peggy Ovire is a single woman rumored to be in a relationship with fellow Nollywood star Frederick Leonard which she publicly denied.

Peggy Ovire has not been linked with any man, neither has she spoken of any to the media herself.

Peggy Ovire has credited God and her father for the success of her career so far while revealing that she gets inspiration from Nollywood greats like Nkem Owoh, Angelina Jolie, Ngozi Ezeonu, and Nse Ikpe-Etim.

She’s very passionate about developing the Nollywood industry in terms of viewership and quality entertainment.

Peggy Ovire‘s works so far have engineered the Sum of $350,000 as her estimated net worth. She is also a fashion entrepreneur and a businesswoman.

Peggy Ovire made a debut in the Nollywood industry with a film titled Best Of Enemies, released in 2013. She’s gone to become one of the most sorts after actresses in contemporary Nigerian movies.

Selected filmography of her include;