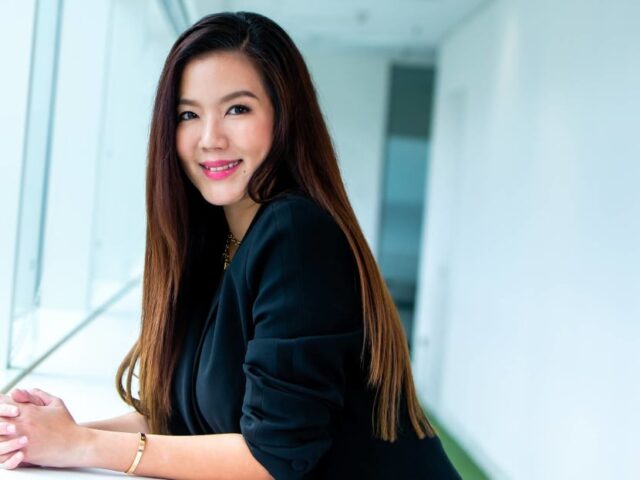 Lu Rui En (born January 29, 1981), addressed as Rui En, is a talented actress and one of the seven princesses of Mediacorp in 2006. She is not just an actress. She is also a talented singer with several solo studio albums.

She forayed into the movie industry in 2002 and has starred in several dramas and series. She got her first lead role in 2005 in a film titled A Promise For Tomorrow as Fang Fang.

In 2002, Rui En was nominated by Star Awards under the Best Theme Song category for her beautiful Connection song. And in 2004, she was also nominated for Best Newcomer by Star Award but lost the award to an opponent.

Lu Rui En was born in Singapore on January 29th, 1981. Her father, whose name is under wraps, worked as a property agent. Her mother, on the other hand, is a housewife.

Her parents separated when she was 17 years. When she was 20 years, her mother got remarried another man. The divorce from her parents broke her spirit. As a result of her broken home, Rui En took to drugs and alcohol. During an interview session with Strait Times in 2008, she disclosed that she used to smoke and drink to cope with insecurity and instability.

She became timid and decided to quit ballet in secondary school. Regarding her education, she attended Singapore-Chinese All Girls School for both her secondary and primary education.

However, she couldn’t complete her studies there, so she enrolled at Raffles Junor College, where Rui En completed her secondary education. Upon graduation, she enrolled at the Nanyang Technological University, where she graduated with a Bachelor of Business in 2004.

From our records, Rui En is currently not married and possibly not in a relationship as well. She was injured in an automobile accident on April 13, 2016, when her vehicle ran over a parked motorcycle as it entered a parking lot close to her home. He was reportedly helping the police with their accident investigation as of April 14.

She later expressed regret and provided a formal statement regarding the mishap. On April 15, Rui En‘s apology was accepted by the motorcycle’s owner through Wanbao. She received a $700 fine for this offense.

In January 2016, Rui En was also involved in a hit-and-run accident. No casualties were involved, and both parties agreed to make a private settlement.

After completing her A Levels at RJC in 1999, Rui En began modeling under the management of Phantom Agency. She appeared in a SingTel advertisement in 2001, catapulting her into the spotlight and landing her a feature in FHM Singapore. She subsequently joined Artistes Network, a division of Hype Records.

In the 2002 MediaCorp drama No Problem, Rui En made her acting debut. She landed her first leading role in 2005 with A Promise for Tomorrow. She was named one of the Seven Princesses of Mediacorp the following year. She was also named one of the most promising young actresses in Singapore’s entertainment industry by I-Weekly.

Rui En was awarded the ‘Best Actress in Leading Role’ at the 2012 Asian Television Awards for her role as a tough cop in the crime drama Unriddle 2. She won her third acting award the following year at the Star Awards 2013 for the same role in Unriddle 2, earning her second ‘Best Actress Award’ at Star Awards.

Rui En has an estimated net worth of $13 million. This includes her earnings from her acting career as well as her investments and other business ventures.

She is one of the richest actresses in Singapore and is considered one of the most successful women in the entertainment industry.

Trucker Hats Are a Growing Trend Among Celebs