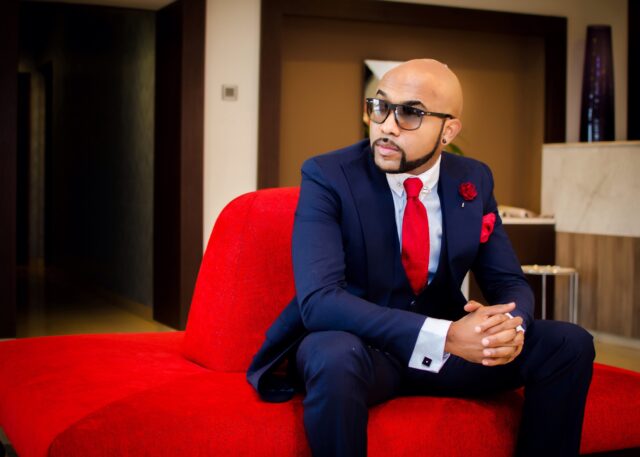 The singer, popularly known for his bald head and soothing voice, is also the proud founder and CEO of the well-established E.M.E Records.

He originates from Badagry, although his mother hails from Calabar, in Cross River State.

Banky W was not born in Nigeria; instead, he was born in the United States of America on 27 March 1981.

Five years after his birth, his parents, Mr and Mrs Wellington, relocated to Nigeria together with his siblings.

As a result, the Yoruba man has four siblings, three brothers and a sister.

The Music star, Banky W did his primary and secondary education in Lagos State, Nigeria, before heading to the United States of America to obtain his University qualification.

There he won a scholarship to study at the Rensselaer Polytechnic Institute situated in New York City.

The Strong Ting crooner, Banky W stated his blistering career while being a student of Rensselaer Polytechnic in New York City. His talents and hard work saw him established a record label named the E.M.E Records while working with GlobalSpec in 2002.

A few years after his studies in the United States, the singer moved back to Nigeria and launched another record label in Lagos State.

He scouted for talents all over the country to fill in the void in his new record label, which brought about the introduction of soon-to-be superstars, Wizkid, Skales, Niyola, and Shaydee.

The singer delivered hit singles, EPs, and Albums during that period.

The singer broke a piece of sad and disappointing news in 2018 when he announced the dissolution of the E.M.E Record label.

Nonetheless, the talented artiste still had other plans implemented when he converted his dissolved record label into a talent management company. The company operated on marketing, adverts, public relations including, brand events.

Banky W also has a talent and passion for acting. He has starred in five different Nollywood movies and has been a success, most of which is “The Wedding Party“, where he acted alongside his wife, Adesua Etomi.

Banky W also had political ambitions. This ambition made him contested for the Lagos’s Eti-Osa Federal Constituency seat in Nigeria’s House of Representatives.

He competed on the platform of the Modern Democratic Party, founded in 2017.

The election was held with the supervision of the Independent Electoral Commission (INEC) on 23rd February 2019.

Unfortunately, he lost the election to eventual winner, Babajide Obanikoro of the All Progressive Congress.

Banky W is an Instagram freak. His good looks may be a significant reason why the singer and actor always post pictures and videos on Instagram daily.

Banky W and his wife Adesua Etomi did their white wedding in the beautiful city of Cape Town, South Africa.

The marriage is blessed with a baby boy named, Isaiah Wellington after an unfortunate miscarriage carrying a set of twins.

There are also rumors claiming that Bank W is the father to the daughter of Nigerian model, Uche Odoh, whom he had dated in the past. The said daughter is eight years old.

Banky W ranks among the top 20 richest musicians in Africa.

The singer has experienced growth in his career over the years, which is why he has an estimated net worth of $12.5 million.

Banky W has released many hits songs in the course of his career. Below is a comprehensive list of songs the talent has released;

Banky W officially has 9 Albums to his name;

Not only is he a musician, but Bank W has also starred in five Nollywood films. Below is the list of movies he has acted in;